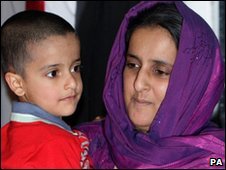 Three men suspected of being involved in last month’s kidnapping of British boy Sahil Saeed have been shot dead by police in Pakistan.

Police said they were killed in Gujrat, Punjab province, after a successful attempt by relatives of one of the men to free him from custody. Police chief Tariq Abbas Qureshi said there was a “brief exchange of fire”. Sahil was kidnapped for 12 days in March. He was released unharmed after a £110,000 ransom was paid by his family. Mr Qureshi said the dead men were “part of a criminal gang involved in the kidnapping of Sahil Saeed”.

He said police were escorting one of the men to Gujrat, via the town of Serae Alamgir, after he had appeared in court there. On the way, the police party was attacked by the man’s brother and cousin, who managed to free him. “Another bigger police party then arrived on the scene and gave chase to the men,” he said. The two brothers were related to a man who was arrested in connection with the case in Spain, Mr Qureshi added. Five-year-old Sahil Saeed was on holiday with his father Raja Saeed in Jhelum in the Punjab region when he was snatched on 4 March during a robbery at his grandmother’s home. Raja Saeed told the media that four armed men ambushed the family as they were getting ready to leave the house to go to the airport.

He said the kidnappers threatened to put an explosive jacket on his son. He said: “My heart pounded. I pleaded with them, telling them I was not a rich man and had no money. I was completely helpless.” The kidnappers initially sought a £200,000 ransom but this was negotiated down. Several men have appeared in court in Pakistan and Spain in connection with the case. Greater Manchester Police said they were continuing to support the Saeed family as well as the Pakistani authorities and other law enforcement agencies with the investigation. The Saeed family said in a statement: “We want to wait for the outcome of the court proceedings in Pakistan and Spain and have every faith in the different law enforcement agencies to bring this to a satisfactory conclusion.”