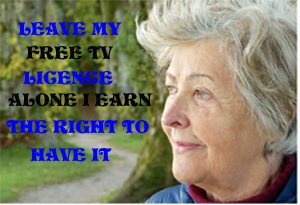 A proposal by the BBC, according to media reports, to scrap or means test TV licence for the over 75’s is one of the most disgrace decision, in my opinion, an organisation with more money than sense could do this to our senior citizen in our community.

Now the question must be what the heck is the BBC thinking? There are many senior citizens over the age of 75 that their only means of connection to the world is through their televisions and some idiotic people who can afford much more than a TV Licence decides to the deprive our elderly of their TV licence privileges.

The mere fact that over 500,000 signed their signature opposing this idiotic decision is a testament that most decent people within our society believe that our protection. There is no doubt that some of the people who the BBC want to take away their free television licence are people who fought in a war to give these insensitive people the privilege to make these pathetic decisions.

To know that over 3.7 million senior citizens will be affected by this decision should it come in force in 2020 is frightening and an absolute disgrace. The BBC ought to be ashamed of themselves how archaic. But we should not be surprised because this is how capitalism works. Squeeze the already poor so that the rich can get richer.