They are divided by geography and share no family link.

But Claire Horner, Cheryl Richards and Cathy Sidaway are united by a very special bond: they have joined forces to have a baby.  After battling breast cancer three times, Mrs Horner’s dearest wish was to have a baby brother or sister for her four-year-old son, Jack. 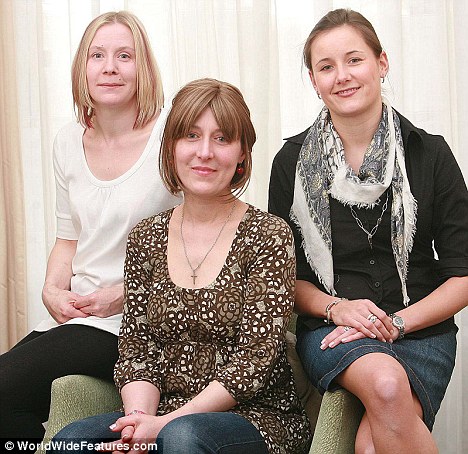 But doctors warned her and husband Dennis that she should not fall pregnant again as it could raise the risk of the cancer returning. So in a remarkable case Miss Sidaway donated her eggs, which were fertilised using Mr Horner’s sperm and Mrs Richards agreed to act as a surrogate to carry the baby. Now Mrs Richards is more than 12 weeks pregnant, in what is thought to be a British fertility care first.

Consultant gynaecologist and fertility specialist Mark Sedler, who is handling the case, said: ‘It is the first time that we have had a situation like this where all parties know each other, yet are unrelated to each other, and there has been a successful ongoing pregnancy.’ Part-time magistrate and nursing sister Mrs Horner was just 37 when she was diagnosed with cancer after discovering a lump in her breast while on holiday with her husband, now 49.  She underwent surgery to remove the lump, but the cancer returned for a second time a year later. At the time the couple, who live in Richmond, Surrey, were undergoing IVF treatment to start a family of their own but had to put their plans on hold.

‘We never gave up on our hopes for a family,’ said Mrs Horner, who is in her mid-40s. ‘But I had to concentrate on trying to beat cancer for the second time.’ This time she had surgery, followed by aggressive chemotherapy and radiotherapy, and managed to beat the disease again. The couple then started IVF treatment again, using donor eggs.  Mrs Horner’s eggs were not of good quality so there would have been no benefit freezing them before cancer treatment. 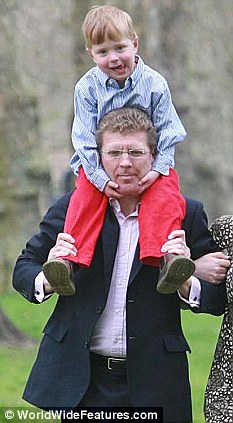 To their delight Mrs Horner became pregnant with son Jack. But 30 weeks into the pregnancy came the devastating blow. The cancer had returned. ‘I felt another lump in my left breast and I knew what it was straight away,’ said Mrs Horner. ‘This time I couldn’t have any scans to see if the cancer had spread as I was still pregnant, so I had to spend eight weeks not knowing whether it had, which was terrible.’

Jack was born in March 2006, and just a week later Mrs Horner underwent surgery for a third time to remove the lump. Fortunately scans showed the cancer had not spread, but the new mother had to endure more exhausting chemotherapy. When Jack was nine months old they decided they wanted another baby. ‘I didn’t want to take any risks, as I wanted to be a mother to Jack,’ said Mrs Horner. ‘I couldn’t put my life at risk by falling pregnant, so we decided to look into surrogacy.’

The couple were put in touch with Mrs Richards, 27, who wanted to act as a surrogate.

They went to a clinic in Cyprus and had three failed surrogacy attempts, using eggs from an anonymous donor and sperm from management consultant Mr Horner. Mrs Horner said: ‘It was devastating. Cheryl wanted to carry on helping us, as by now she had become a friend to us and she could see how much we wanted a baby.’

Then in March last year, Mrs Horner met business development manager Miss Sidaway, 30, at a health and wellbeing show in London, and they struck up a friendship. When Mrs Horner told Miss Sidaway, who doesn’t have children of her own, about her search she volunteered her own eggs.

The three women went to the Care Fertility Clinic in Manchester to see Mr Sedler.

Miss Sidaway, who lives in York, donated a batch of eggs, and then foster carer Mrs Richards, who lives in Cornwall with her husband Nick, 37, a delivery driver, and their four children, became pregnant on the second implantation attempt.

Last night a delighted Mrs Horner said: ‘We are just so thrilled that after all this time Cheryl is finally pregnant with our baby. ‘We just can’t thank Cheryl and Cathy enough for helping us  –  they have been such wonderful friends throughout our journey to have this baby. We couldn’t have done it without them.’ Mrs Richards said: ‘It’s been an emotional rollercoaster for all of us, so when I found out I was pregnant I was over the moon.’ Miss Sidaway added: ‘I just wanted to help Claire and Dennis have another baby, and I never hesitated in donating eggs to Claire.’