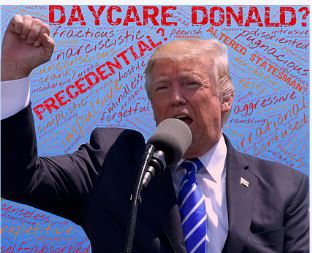 Donald Trump needs to get his head examined. According to an article in the Metro newspaper, Donald Trump claims that he is the best President for Black People.

My opinion, Donald Trump is suffering from a delusion of grandeur, which make him unaware of how much the majority of Black despises him and all that he represents. Given the option of choosing between Trump and Hitler, I would select Adolf Hitler every time.

There can be no illusion that Adolf Hitler and the Nazis were the worse and most disgraceful dictator of the 20th Century and yet I would rather deal with him over Trump anytime.

Donald Trump cannot seem to understand that he is the worst President that the United States has ever voted into office. The founding fathers must be turning in their graves knowing that instead of a great President is leading the country, they now have a childish, racist, incompetent and a poor excuse for a human being in the White House.

Greatness is not what you look like; it is the ability to lead effectively and carrying all citizens behind you irrespective of colour or creed. Have the ability to treat all people with respect and dignity righting wrong each time it raises its ugly head and ensuring that security forces treat citizen equally and fairly regardless of the colour of their skin.

The White House becomes ineffective when it appears that instead of a competent governing body, it is, seen as a big creche with a spoilt brat at the head of the nursery. So, Mr President please don’t kid yourself, the Black community do not like or respect you, and the sooner you understand that you may begin to stop suggesting that we do.