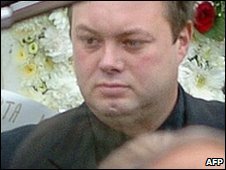 One of Australia’s most infamous gangland bosses, Carl Williams, has been beaten to death in prison.

Police said Williams, 39, died of a cardiac arrest after sustaining head injuries in a fight with an inmate.

He was serving a minimum of 35 years at a high security prison in Melbourne for the murder of three gang rivals.

Commonly known as “Fat Boy”, Williams was a well-known figure in Melbourne whose life of crime had been turned into a hit television series.

In a statement, Victoria police said they believe “an altercation occurred between Williams and another inmate” at Barwon Prison.

“Homicide squad detectives are at the scene and are investigating the circumstances,” the statement said.

Williams’ lawyer, Rob Stary, said his client had been in solitary confinement at the prison, supervised “every minute of every day” and only meeting other inmates during exercise periods.  “Whatever happened one would expect would have been supervised,” Mr Stary told ABC News.

The BBC’s Nick Bryant in Sydney says the baby-faced Williams was a central figure in Melbourne’s gangland wars, in which 35 people were killed over a 20-year period. He gained further notoriety with Underbelly, a hit television series charting his life, which became Australia’s most-watched drama.