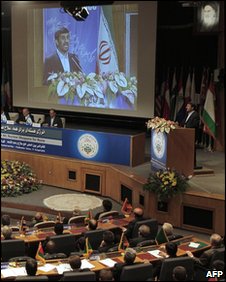 Iran is holding its own nuclear summit after one in Washington

Iran’s Supreme Leader Ayatollah Ali Khamenei has labelled the US an “atomic criminal” at a conference on nuclear disarmament in Tehran.

He also said that the use of nuclear weapons was prohibited by religion.

Iran’s President Mahmoud Ahmadinejad said an independent body should be set up to oversee nuclear disarmament.

Iran has been angered by a recent US review of nuclear policy, which Tehran sees as a threat to use nuclear weapons against it, a BBC correspondent says.

Iran’s leadership has used this conference on nuclear disarmament to underline what it says is its moral opposition to nuclear weapons, says our Tehran correspondent Jon Leyne, reporting from London.

He says it is clearly meant as an answer to those who fear Iran is itself trying to develop its own nuclear arsenal.

Ayatollah Khamenei said in a message read out at the conference: “Only the US government has committed an atomic crime.

“The world’s only atomic criminal lies and presents itself as being against nuclear weapons proliferation, while it has not taken any serious measures in this regard,” he said.

He also told the conference that the use of nuclear weapons was “haram” – prohibited under Islam.

President Ahmadinejad called for the US and all countries who possessed nuclear weapons to be suspended from the UN nuclear watchdog, the International Atomic Energy Agency.

He said there should be an independent international body set up to oversee nuclear disarmament.

Our correspondent says the debate will no doubt intensify as a conference approaches that will review the nuclear non-proliferation treaty, just at a time when Washington rallies support for new sanctions on Iran over its nuclear programme.

The US hosted a big international conference of 47 nations last week to discuss nuclear security.

Iran was not invited as the US fears Tehran is trying to develop nuclear weapons.  Tehran says its nuclear programme is for purely peaceful purposes.