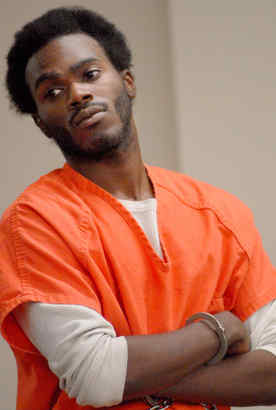 Kuasheim “Presto” Powell [right] in Superior Court, where he was held on $1 million bail on the Camden murder charges.

Kuasheim “Presto” Powell killed a young couple in Camden during a two-day rampage in which four people died or were wounded simply because they didn’t do what Powell wanted, according to a source familiar with the investigation.

New details of the Camden slayings emerged on Tuesday after Powell, 24, was arraigned in Superior Court and held on $1 million bail on charges that he murdered Michael “Doc-Money” Hawkins, 23, and Hawkins’ girlfriend, Muriah Ashley Huff, 18, on Feb. 22.

Judge Thomas Brown set the high bail after agreeing with Camden County Assistant Prosecutor Ira Slovin that Powell was a flight risk and a danger to the community.

Powell, of Camden, was arrested in California last month and charged with killing Hawkins and Huff, both of Burlington County. In court, authorities noted that Powell also had been charged with attempted murder in Pennsauken, where he is accused of shooting two men one day before the Camden slayings.

“So they’re putting that on me, too?” a smiling, yet apparently surprised, Powell asked at the hearing. He said little else except to confirm that he had no attorney and to make a passing comment about the news photographers taking his picture.

According to sources, the lanky Powell is the leader of Camden’s Lueders Park Piru Bloods, named after the gang’s Los Angeles roots. The day before he was slain, Hawkins was with Powell and other gang members at the 36th Street River Line Station in Pennsauken, authorities said. Hawkins was accused of stealing alcohol from the home of a gang member and warned by Powell to stay out of Camden.

During the station visit, a passerby who was talking on the phone with his brother smiled and said hello to a girl among the Bloods gang members. Powell became enraged, according to a source. The passerby told his brother he was in trouble and took off his coat to fight Powell, the source said. By the time the brother got there, Powell had shot the passerby, according to police. Powell then wounded the brother, officials said.

Pennsauken Lt. Eric Davies said neither of those victims had any gang affiliation. Both men survived. “Our victims were in the wrong place at the wrong time, which makes what happened so disturbing,” Davies said. Powell is the only person charged in those shootings. The next day, Hawkins showed up at an apartment on Berkley Street in Camden where Bloods gang members lived. Huff, a cosmetology student at the Burlington County Institute of Technology, tagged along.

Powell was called to the rowhouse where he believed some of the gang were going to confront him about his leadership. He arrived in the afternoon with other gang members, authorities said. By that time, Hawkins and Huff already had been tortured for hours, authorities said.

Powell was directed to the closet where Hawkins was bound and gagged, according to the source. Gang members said they had found proof that Hawkins was a member of the rival Crips gang, the source said. “Clearly, this is a case of knowing and purposeful murder,” Slovin said in court. The slayings were “nothing short of shocking,” the prosecutor said. Witnesses told investigators that Powell beat Hawkins and shot him five or six times. He then helped beat and strangle Huff, Slovin said. Huff “begged for her life,” he said. Afterward, she was stripped and buried in a shallow grave with Hawkins.  Ten people, including four juveniles, have been charged with murder.