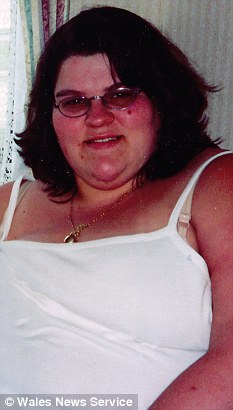 A woman who had her tongue pierced to celebrate her birthday was found dead with blood poisoning just 48 hours later.

Care worker Amanda Taylor, 34, died from suspected blood poisoning and pneumonia on April 7 after having the fashionable steel bar put through her tongue.

Her heartbroken family told today how Miss Taylor fulfilled her birthday wish by having a tongue piercing – made fashionable by royal Zara Phillips and pop stars Pink and Scary Spice Mel B.  Her mother Lorraine, 61, said the piercing was ‘something she always wanted.’

‘Four days before her birthday she told me: “I really want it done mum.” I was against it – and Amanda never did anything unless she had my blessing.  ‘But her friend was having it done too so I said to Amanda: “You’re going to be 34. I’ll give you my blessing, but I’m still not 100 per cent happy.” We’re a very close family. If I’d said no she wouldn’t have done it.

‘I wish I said no that day instead of yes.’ Miss Taylor, of Caerphilly, South Wales, took a friend for moral support when she went for the piercing on her birthday.  She paid £25 to have a 22mm stainless steel bar inserted in her tongue at Silverhand Jewellery in Cardiff city centre. She later went for icecream to numb the pain in her mouth.

The next morning her tongue had swollen and the following day she went to her GP, who sent her home with antibiotics for suspected tonsillitis.  Amanda continued to feel unwell and spent the day at home. Her worried mother went to visit her at 5.30pm, to find her dead on the living room floor. ‘She died too young. I can’t believe this has happened. I want to stop other families going through what we have.’ Initial post-mortem findings show Amanda died from septicaemia and bronchial pneumonia.

But further samples have been sent away for analysis and it could be eight weeks before Amanda’s family discover the full findings.  Miss Taylor, a care worker for the elderly since she was 16, lived alone with her Shih Tzu dog Bobbi. Her father Philip, 61, said she was devoted to her job.  Sister Ceri, 37, said: ‘Amanda was so excited about the tongue piercing.  ‘Amanda was so bubbly and never thought about herself, only others. She loved life and lived it to the full.’