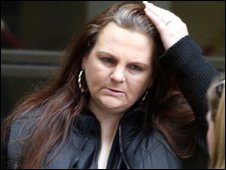 A woman who blinded a nightclub doorman in one eye by stamping on it with her stiletto heel has been jailed for three years and four months.

A sheriff told Sarah Marsden she had inflicted an “appalling injury” on head bouncer Graham Roach outside the Shanghai nightclub in Edinburgh. Mr Roach lost his eye despite undergoing a four-hour emergency operation after the attack last July.

Sheriff Neil MacKinnon said prison was the only appropriate sentence.  He told 37-year-old Marsden: “You inflicted an appalling injury on the complainer without any thought to the consequences for him or his family.”  Marsden, from Edinburgh, had previously admitted carrying out the assault on 28-year-old Mr Roach.

Her partner Anthony Walker, 49, pled guilty to breaching the peace and was ordered to carry out 180 hours of community service.  The court had been told how Mr Roach went to help a colleague who was asking Marsden and Walker to leave the nightclub because of their drunken behaviour.

But after apparently bringing the situation under control, Mr Roach fell to the ground after colliding with Walker.  Marsden then stamped on his face, splitting his eye socket wide open.  Mr Roach is due to undergo further surgery to have an implant placed in his eye to replace the damaged eye ball, although the procedure will not restore his sight.

Defence agent Victoria Good said Marsden had a “sad background” until about two years ago, which involved drug misuse from a young age which was financed by prostitution.  Ms Good said: “When she first appeared from custody the first thing she asked me was how Mr Roach was and how bad the damage was and she has expressed a deep level of remorse throughout.

“She and her partner had gone out for the evening, she had a couple of alcoholic drinks but in no way was under the influence of alcohol and would not seek to use alcohol as an excuse.  “She saw her partner involved involved in an altercation and saw him struggling with the bouncer and she thought he was being hurt and she ran down and became involved. It was a fast incident with tragic consequences for the victim.”