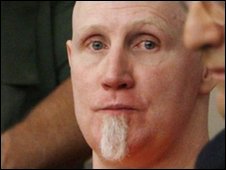 Gardner  [right] killed a man during an escape attempt in 1985

A convicted murderer in the US state of Utah has chosen to be executed by firing squad.

When given a choice between lethal injection or being shot, Ronnie Lee Gardner told the judge: “I would like the firing squad, please.”  Of the 35 US states that have the death penalty, Utah is the only one to give firing squads as an option.   Critics say the method is a relic from the state’s Wild West past and should be abolished.   The judge in Salt Lake City set Gardner’s execution date for 18 June, but Gardner’s lawyer said he would appeal.

Correspondents say he may still petition the state parole board to commute his sentence to life imprisonment.

The 49-year-old convict killed a lawyer in a shootout while trying to escape from a courthouse in 1985.  He would be only the third man to be killed by firing squad since the Supreme Court allowed states to have the death penalty in 1976.  The first man to be executed after capital punishment was re-instated was Utah murderer Gary Gilmore. He famously said “Let’s do it” before facing the bullets in 1977.

The second – John Albert Taylor – attracted huge media attention for his execution in 1996.  Should Gardner’s scheduled death go ahead, it is likely to garner a similar media storm, the BBC’s Madeleine Morris in Washington says.  Death row convicts in Utah were for decades allowed to choose their method of execution.  State legislators removed that choice in 2004 and made lethal injection the standard method – but inmates sentenced before then still have a choice.