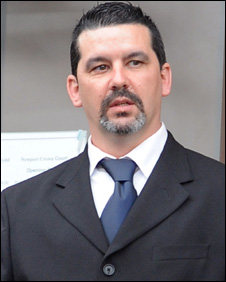 A teacher who put a “shocking” child sex abuse video on a memory stick was caught after it was found by his pupils at a £1,200-a-term private school.

Robin Taylor, 41, of Swansea, had images ranging up to the most serious “level five” stored on the device.

Tayor, who taught computer skills at St John’s School in Porthcawl, was jailed for six months for making and possessing indecent child images.

His barrister told Newport Crown Court it was a “spectacular fall from grace”.   The court heard the computer memory stick was picked up by pupils doing homework in an IT classroom.  They plugged the memory stick into a computer to see who owned it.  Meiron Davies, prosecuting, said the youngsters found a folder named “mine” containing three videos and an image of a naked girl.

He said: “Mercifully, the children didn’t open these videos on the stick.”  One 17-minute video showed a girl aged about 13 in what Judge RP Rowlands described as “dire distress” during a sex ordeal.  One pupil, who gave evidence via video, said teaching files were found next to the child abuse videos on the memory stick. He said: “We didn’t want to leave it lying around for younger ones to pick up.

“I was very confused and thought why is this in school and who would do something like that?”   The school’s headmistress Carol Ann Clint called in the police, the court heard.  Police found a second memory stick with an identical pornographic image at Taylor’s home.  Eugene Egan, defending, said his client had “suffered a spectacular fall from grace”.  He said: “He has lost his career, his good name and will forever be a convicted sex offender.”

Judge RP Rowlands ordered Taylor to register as a sex offender for seven years after his conviction on three charges, saying he was “shocked” by what Taylor had downloaded.  He said: “It showed a young girl aged about 13 in dire distress. We don’t know where she is, what’s become of her but that video lasted 17 minutes.

“You must have been prepared to download that and watch it. It goes without saying that to deliberately store such images is quite depraved behaviour. “This is far from being a victimless crime. Their suffering which is so apparent is directly attributable to people like you perhaps many thousands of miles away who watch it.”   Taylor, who is married, wept as he was taken down. His wife, who was in court, shouted that she would stand by him.