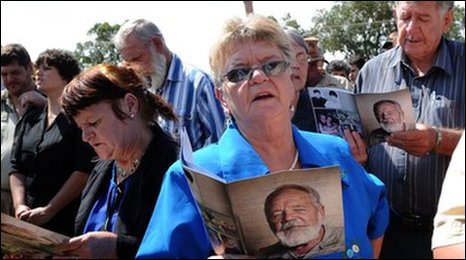 The road to Ventersdorp, home of the late Eugene Terreblanche, is fringed with fertile fields.

It is a breath of fresh air driving through the countryside. But then you see the road signs, they are daubed with racist graffiti. You think it is a throwback to the 1980s, but then you realise the spray paint is still fresh and these racist slogans come from the mouths of a post-apartheid generation.

You can almost taste the racism in Ventersdorp. I was trying to get a sense of how people were reacting to the killing of the town’s most infamous resident and whether the extreme right-wing views he represented had become less evident since the fall of apartheid.

I intercept a white woman as she emerges from a chip shop. With her neatly coiffed hair and freshly-applied lipstick, she is a picture of what might appear to be “rural decency”. And she is happy to talk. “Did she expect a backlash following Terreblanche’s death?” I enquire politely. “Yes,” she says.

And, taking me by surprise, she describes rather forcefully how she would happily take up arms herself to avenge the killing. This lady may represent an extreme of Afrikaner thought, but in this town, where the swastika-like emblem of the AWB (Afrikaner Resistance Movement) stands proud, there are many conservatives whose views have hardened these last few days. One black woman I talked to lamented that Eugene Terreblanche had been made a martyr.

“We may pay the price,” she told me. The khaki-and-black clad members of the AWB were largely dismissed in the mid-90s as an embarrassment and an irrelevance. I was told in Ventersdorp that since Terreblanche’s killing, the AWB claim that new members are queuing up to join, but few here believe they will be a significant political force.

It was teeming with rain when I met Harry at a farm half-an-hour’s drive from Ventersdorp. He had just picked his son up from university where black and white students now study side by side. Harry’s parents were killed two years ago in a brutal robbery at their home. His best friend Paul was gunned down on his farm in Limpopo just a few weeks back. Farm killings, fuelled by South Africa’s gross inequalities, have become big news. And because the majority of farmers are white, it has assumed a racial dimension.