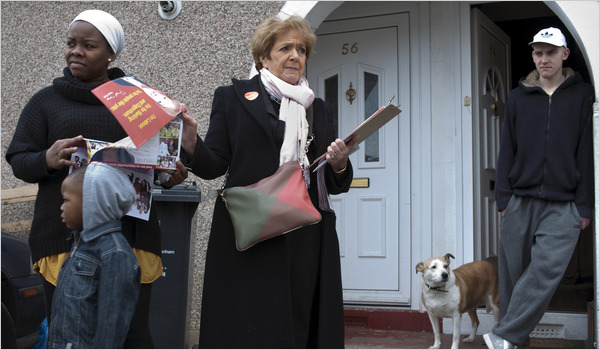 LONDON — Few people in the working-class neighborhood of Barking seem willing to proclaim unalloyed enthusiasm for the ultra-right-wing, anti-immigration British Nationalist Party. But get past “hello” in any conversation and their feelings come spilling out.

“I’m not a racist, but they’re letting so many of them in,” complained Bill Greed, 66, speaking of foreigners. “They come and sign on for benefits. A lot of the children in schools don’t even speak English. There’s so many illegal ones that the government can’t even find all of them.”

The B.N.P.? “I agree with what they’re saying, but not with how they go about it,” Mr. Greed said.

As they prepare for the national election on May 6, Britons everywhere identify immigration as one of their biggest concerns. But in few places is the issue so urgent, or the electoral choices so stark, as in the borough of Barking and Dagenham, on the eastern edge of London. With little support for the Tory or Liberal Democratic Parties here, the race is between the unpopular ruling Labour Party and an emboldened B.N.P. capitalizing on its rival’s weaknesses.

Once Barking and Dagenham were white, blue-collar bastions, with 40,000 people employed at a huge Ford factory. Now 35 percent of the residents are from ethnic minorities, up from 5 percent 10 years ago. The factory has given way to a diesel engine plant with one-tenth the work force. Unemployment stands at 8 percent.

The influx has put a serious strain on services, particularly housing. Mick W., a 20-year-old maintenance worker who did not want to give his last name because he is employed by the Borough Council, said his family waited a decade for decent public housing while immigrants with large families leapfrogged ahead.

“I don’t mind the ones who come and get a job,” he said, “but all they do is claim, claim, claim.” The B.N.P.? “I can’t see them running the country, but I support what they stand for.”

The B.N.P. says it stands for many things, but chief among them is an implacable belief that Britain belongs to indigenous white Britons. Until a judge struck down the provision last month, the party had a whites-only membership policy. It favors an immediate end to immigration and the repatriation of people of foreign descent.

In 2006, the party won 12 of the 51 seats on the Barking and Dagenham Council, its strongest showing anywhere in the country. This time, it hopes to secure 14 more seats, enough to take control of the council, its 300 million pound annual budget and its 9,300 employees. It is also working to unseat Margaret Hodge, the Labour stalwart who represents Barking in Parliament.

Ms. Hodge’s opponent is Nick Griffin, the B.N.P. leader. A well-dressed, well-spoken Cambridge law graduate, Mr. Griffin, 51, has denied that the Holocaust took place, and also said that Hitler “went a bit too far.” In 1998, he was convicted of distributing material likely to incite racial violence.  But in recent years Mr. Griffin has taken care to moderate his public statements as his party seeks mainstream electoral success. Last year, he was elected to the European Parliament from North West England.

In Barking, B.N.P. supporters are campaigning against Ms. Hodge by using her maiden name, Oppenheimer, apparently in a bid to court the anti-Semitic vote, and by falsely accusing her of supporting a fictitious plan that — the story goes — pays Africans to move in, presumably increasing Labour’s electoral base. “It’s the most important election I’ve ever fought and the one I feel most passionate about,” Ms. Hodge said as she campaigned door to door last weekend. “I came into politics to fight racism, and the idea that these people could get a seat in Parliament or get control of a council is just against everything I stand for.”

In a place full of angry, disaffected voters, many of whom did not want to come to the door or who closed it upon discovering a politician was standing outside, her task was not easy. Ms. Hodge tried to enumerate Labour’s achievements, but then changed tactics as she gauged the anti-government mood on the doorsteps.  “It’s been a horrible time, but it’s a two-horse race here, I’m afraid,” she told one woman, who identified herself as a Tory sympathizer. “If you want to keep the B.N.P. out, you’re going to have to swallow hard and vote for us.”

Fears about immigration are echoed across Britain, where new arrivals have added to a leap in population in the last decade. In a country that is already among the most crowded in Europe, the prospect of even more growth inflames people’s fears at a time of financial crisis and worries about terrorism.  Concerns that immigrants are unfairly taking up public resources in such places as schools and hospitals have been aggravated by anti-government newspapers like the populist Daily Mail, which regularly publish articles that gnaw at public anxiety.

Earlier this month, for instance, The Mail reported on a hospital with employees from 70 countries who spoke such poor English, it said, that they had to take state-financed language classes. On Sunday, the paper reported that Muslim women who are hospital workers are being now allowed to cover their forearms because of religious modesty, in contravention of standard hygiene rules.

Perhaps belatedly, Labour is acknowledging how deeply voters feel about immigration. On Monday, it said it would require that all local government workers who deal with the public be able to speak English. In Dagenham, Meg Hillier, a fellow member of Parliament and a minister in the immigration office, was campaigning alongside Ms. Hodge, armed with a sheaf of information about Labour’s immigration policies.

“We deport someone every eight minutes,” Ms. Hillier said. “We fingerprint anyone who comes in for over six months. Foreigners now have to carry special national identity cards.” Ms. Hillier said the government was not pandering to xenophobia, but responding to public concern. “People are allowed to have fears about immigration,” she said.  At the Barking Saturday market, where white faces mingle with brown and black ones, and where burka-shrouded forms glide past women in tank tops, 72-year-old Freda Shaw surveyed the scene last weekend and shook her head.

“I don’t think the B.N.P. is the answer — they’re just racist,” she said. “But look — there’s not one white shop here. Where I live, you need a passport to get in.” As it happened, Dominic Carman, the Liberal Democratic candidate for Parliament, was campaigning down the street. He has a single goal: to stop the B.N.P. “They’re the obvious beneficiary of the protest vote against the ineptitude and incompetence of Labour,” he said. “The B.N.P. are capitalizing on the problems here by blaming it all on immigration.”  Mr. Carman gestured at the market stalls, a cacophony of noises and odors and exotic goods from around the world. “The true spirit of multiculturalism is alive and well in this market,” he said. “This is what Nick Griffin wants to destroy.”