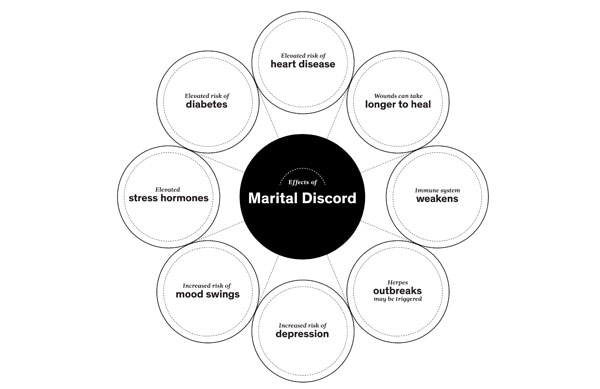 In 1858, a British epidemiologist named William Farr set out to study what he called the “conjugal condition” of the people of France. He divided the adult population into three distinct categories: the “married,” consisting of husbands and wives; the “celibate,” defined as the bachelors and spinsters who had never married; and finally the “widowed,” those who had experienced the death of a spouse. Using birth, death and marriage records, Farr analyzed the relative mortality rates of the three groups at various ages. The work, a groundbreaking study that helped establish the field of medical statistics, showed that the unmarried died from disease “in undue proportion” to their married counterparts. And the widowed, Farr found, fared worst of all.

Farr’s was among the first scholarly works to suggest that there is a health advantage to marriage and to identify marital loss as a significant risk factor for poor health. Married people, the data seemed to show, lived longer, healthier lives. “Marriage is a healthy estate,” Farr concluded. “The single individual is more likely to be wrecked on his voyage than the lives joined together in matrimony.”

While Farr’s own study is no longer relevant to the social realities of today’s world — his three categories exclude couples living together, gay couples and the divorced, for instance — his overarching finding about the health benefits of marriage seems to have stood the test of time. Critics, of course, have rightly cautioned about the risk of conflating correlation with causation. (Better health among the married sometimes simply reflects the fact that healthy people are more likely to get married in the first place.) But in the 150 years since Farr’s work, scientists have continued to document the “marriage advantage”: the fact that married people, on average, appear to be healthier and live longer than unmarried people.

Contemporary studies, for instance, have shown that married people are less likely to get pneumonia, have surgery, develop cancer or have heart attacks. A group of Swedish researchers has found that being married or cohabiting at midlife is associated with a lower risk for dementia. A study of two dozen causes of death in the Netherlands found that in virtually every category, ranging from violent deaths like homicide and car accidents to certain forms of cancer, the unmarried were at far higher risk than the married. For many years, studies like these have influenced both politics and policy, fueling national marriage-promotion efforts, like the Healthy Marriage Initiative of the U.S. Department of Health and Human Services. From 2006 to 2010, the program received $150 million annually to spend on projects like “divorce reduction” efforts and often cited the health benefits of marrying and staying married.

But while it’s clear that marriage is profoundly connected to health and well-being, new research is increasingly presenting a more nuanced view of the so-called marriage advantage. Several new studies, for instance, show that the marriage advantage doesn’t extend to those in troubled relationships, which can leave a person far less healthy than if he or she had never married at all. One recent study suggests that a stressful marriage can be as bad for the heart as a regular smoking habit. And despite years of research suggesting that single people have poorer health than those who marry, a major study released last year concluded that single people who have never married have better health than those who married and then divorced.

All of which suggests that while Farr’s exploration into the conjugal condition pointed us in the right direction, it exaggerated the importance of the institution of marriage and underestimated the quality and character of the marriage itself. The mere fact of being married, it seems, isn’t enough to protect your health. Even the Healthy Marriage Initiative makes the distinction between “healthy” and “unhealthy” relationships when discussing the benefits of marriage. “When we divide good marriages from bad ones,” says the marriage historian Stephanie Coontz, who is also the director of research and public education for the Council on Contemporary Families, “we learn that it is the relationship, not the institution, that is key.”

Some of today’s most interesting research on the relationship between marriage and health is being led by a pair of researchers at Ohio State University College of Medicine. The duo, Ronald Glaser and Jan Kiecolt-Glaser, are also, fittingly, married to each other.

Glaser and Kiecolt-Glaser’s scholarly collaboration has its roots in a chance encounter during a faculty picnic in October 1978 on the Ohio State campus. Glaser, who is a viral immunologist, spotted an attractive woman standing with members of the psychiatry faculty. Although their eyes met only briefly, he caught a glimpse of her name tag. Intrigued, he tried to track her down, calling the psychiatry department chairman to ask if he knew a petite blonde on staff with a name like “Pam Kiscoli.” The department chairman figured out that Glaser was talking about a new assistant professor named Jan Kiecolt. Glaser and Kiecolt eventually met for lunch at the university’s hospital cafeteria. They married a year later, in January 1980.