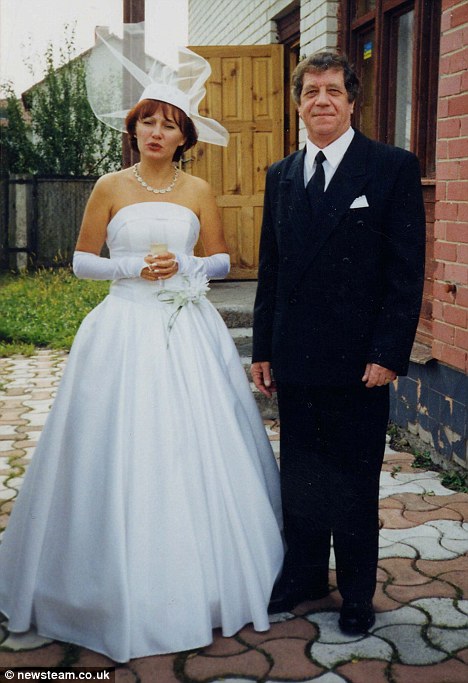 The family of a man who drowned while on holiday with a lover he met on the internet were shocked to find that he had married a year earlier after another online affair.

Instead of inheriting his £70,000 estate, his children saw the lot handed over to a 30-something Ukrainian woman they had never even heard of.

The tangled love life of Michael Evans, 63, came to light after his death in the sea at a Central American beauty spot while visiting his lover.

Mr Evans, a car mechanic from Birmingham, had two previous wives, one of whom was Swedish, and nine children.

But his family discovered his most recent marriage to a woman called Nadia only when they came across the wedding photographs after he died.

Transcripts of interviews with Mrs De Giovani, a student, said she and Mr Evans went swimming at San Diego, in the La Libertad region of the country.

‘They both went into the water, then she said she wanted to get out and massage her legs,’ the transcript said. ‘While she was massaging her legs she looked out to sea but she couldn’t see him.’

Mr Evans’s body was spotted and pulled out of the water by tourists, but they could not find a pulse.

He had been suffering from a heart condition, for which he was taking medication. A post mortem examination revealed that he had drowned.

Mr Evans’s sister Dawn Taylor, the only relative to attend the Birmingham inquest, said she contacted her brother’s widow to break the news of her husband’s death.

Mrs Taylor, from Bromsgrove in Worcestershire, said: ‘I knew nothing of her. I had never met her.’

‘She spoke extremely good English and when I told her she was absolutely heartbroken about it.’

After the inquest, Mrs Taylor claimed there had been family quarrels over Mr Evans’s money and said some of his children blamed her for alerting his widow to his death. She said: ‘My brother had a very colourful life but he didn’t deserve it to end like this.   All the family now are saying what a fool I was because they can’t get the money. If I hadn’t found out that Nadia was his wife it would have been hell for me because she was entitled. I had to contact her by law.

‘Some of the children hate me.  They weren’t happy at all  –  they thought they were entitled to this money. It’s just a mess-up. It’s a horrible end.’  She asked the San Salvador authorities to return her brother’s possessions, but got only a small box containing a razor, a photo album and a wallet with a £10 note in it, she said.  Mr Evans’s children  –  only three of whom are believed to have attended his funeral in 2006  –  and Mrs Nadia Evans could not be contacted for comment.