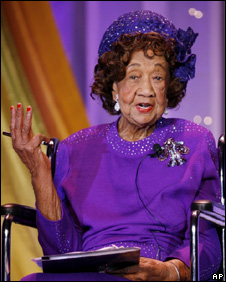 One of the pioneering voices of the US civil rights movement, Dorothy Height, has died at the age of 98.

The leader of the National Council of Negro Women for 40 years, Ms Height was an advocate for gender equality and the desegregation of the US armed forces.

In 1963, she stood on the platform with Martin Luther King Jr during his famous “I have a dream” speech in Washington.

President Barack Obama called Ms Height “the godmother of the civil rights movement” and a hero to Americans.

“Dr Height devoted her life to those struggling for equality… and served as the only woman at the highest level of the civil rights movement – witnessing every march and milestone along the way,” he said in a statement.

Born in Virginia in 1912, into a segregated country where women could not vote, Ms Height trained as a social worker before becoming an advocate for civil rights and gender equality during the 1930s.

She worked to prevent lynching, desegregate the armed forces, reform the criminal justice system, and for free access to public accommodation.

In the 1950s and 60s, Ms Height was a key organiser for Martin Luther King Jr along with other civil rights leaders, and was often the only woman in the movement’s inner circle.

Ms Height received two of the nation’s highest honours – the Presidential Medal of Freedom in 1994 and the Congressional Gold Medal in 2004.

When awarding her the congressional medal, then President George W Bush noted that Ms Height had met every president since Dwight D Eisenhower, and “told every president what she thinks”.

The BBC’s Steve Kingstone in Washington says that with a turn of phrase as elegant as her dress sense, Ms Height liked to remark: “If the times aren’t ripe, you have to ripen the times.”

She died of natural causes at a hospital in Washington on Tuesday.