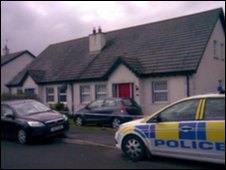 A man has been arrested by police investigating the murder of a woman found strangled in Ballyclare, County Antrim.

Pauline Haveron’s body was found in her home at Huntingdale Green on Sunday. The 53-year-old had a grown-up family and lived with her 18-year-old son.

Police arrested a 55-year-old man in the Antrim area on Tuesday afternoon.

Details were released on Tuesday after a post-mortem examination and consultations with the victim’s family.

Neighbours said Mrs Haveron was a well-known and well-liked member of the community.

They said they first realised something was wrong when an ambulance was called to the house on Sunday.

The house remains cordoned off as police forensic officers carry out their work.

Detectives want to speak to anyone who was in the Doagh Road and Huntingdale areas between 2200 BST on Saturday and 0100 BST on Sunday.

Mrs Haveron was separated from her husband. It is understood she lived with her 18-year-old son who was away last weekend.

“Our thoughts go out to her son Jonathan who’s unable to come home from Australia due to the volcano ash problems,” he said.

“It is going to be extremely difficult for the family to come to terms with this, and it has had a major impact on the local community as well.”

One neighbour, Tom Mehaffey, said: “We are very shocked – on Sunday when it started off, an ambulance and police car arrived and we thought there’d been an illness or something had happened, but we didn’t think for one minute it would be a murder scene.

“When we heard the news, we were really shocked. It’s a lovely quiet area and you just don’t expect something like this to happen.”