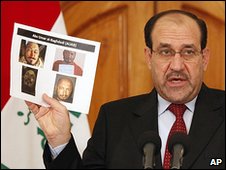 US and Iraqi forces have killed another al-Qaeda in Iraq leader in the north of the country, army officials say.

The man identified as Ahmed al-Obeidi was killed in the northern province of Nineveh, Iraqi military spokesman Maj Gen Qassim al-Moussawi said. The news comes the day after the government announced two leading insurgents had been killed.

Iraqi al-Qaeda leader Abu Ayyub al-Masri and Abu Omar al-Baghdadi, who led an affiliated group, died on Sunday.  Gen Moussawi said Mr Obeidi, also known by the name Abu Suhaib, was in charge of al-Qaeda in Iraq’s operations in the northern provinces of Kirkuk, Salahuddin and Nineveh.  Gen Ray Odierno, commander of US forces in Iraq, said the man was “the military emir” of the region.

“He was the guy in charge of operations from Tikrit all the way up to Mosul out to the Syrian border,” he told AFP news agency.  The BBC’s Jim Muir in Baghdad says the Iraqi government is now convinced they have al-Qaeda on the run, but says that in the past when leaders are killed others have just stepped in to fill their posts.  The loose, cell-like structure of the organisation means that its decapitation does not necessarily lead to paralysis, our correspondent adds.

Al-Qaeda in Iraq has been blamed for some of the bloodiest insurgent attacks in the country since the US-led invasion of 2003.  But since early 2007 the US has adopted a more proactive policy in confronting insurgents in Iraq and undermining their support within the Sunni community.  The sectarian strife on which the Sunni insurgents thrived also died away as coalition and Iraqi government forces moved to curb Shia militias, analysts say.

The US is hoping to begin a withdrawal of its forces in August this year.  Meanwhile, Prime Minister Nouri Maliki is currently contesting the results of the 7 March election, which was narrowly won by former PM Iyad Allawi.  Election officials have ordered a manual recount of votes cast in Baghdad after complaints from Mr Maliki that the electronic system of counting was unreliable.

The recount could alter the final result of the poll.