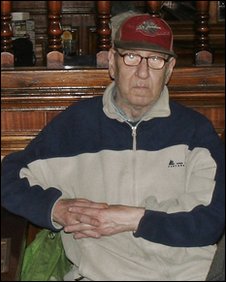 Alan Derrick [right] was worried about being evicted

A body lay undiscovered under a sofa in a sheltered flat in Bristol for nearly 10 years, an inquest has heard.

The dead man, Denis Pring, 73, had been living with city council tenant Alan Derrick, who has learning difficulties. The inquest heard Mr Derrick did not want to tell the authorities that Mr Pring had died because he was worried he would be evicted.  The coroner recorded an open verdict into Mr Pring’s death at the hearing in Flax Bourton, near Bristol.

Mr Pring is believed to have died at some point between April and June 1998.  The inquest heard that he had been living in the flat unofficially.

Mr Derrick, the dead man’s friend and drinking partner, had invited him to stay there because he had nowhere else to go. But when he died suddenly, Mr Derrick panicked and worried that he might be evicted.

A year after the death, a mobile council warden was called to inspect the flat after complaints of a terrible smell.

Sandra Wedlock told the court that she had walked by an overturned sofa at the property in the Bedminster area of the city without noticing the body underneath it.

She put the source of the smell that neighbours had complained about down to an overflowing toilet and no further action was taken by the council.

Mr Pring’s skeleton was finally discovered by council cleaning staff in 2008 after Mr Derrick moved out of the property, the inquest heard.

Mr Derrick, who was described by neighbours as ‘a vulnerable loner’, is believed to be living elsewhere in the area. No criminal charges were brought against him.

Residents groups said the case proves there is a need for more live-in wardens to supervise sheltered accommodation.  Jon House, Bristol City Council’s deputy chief executive, expressed his condolences and ‘apologised unreservedly’ to Mr Pring’s family and the neighbours for the distress they suffered.

“I want to acknowledge that a more active intervention nine or 10 years ago, and a healthier dose of common sense, might have stopped Mr Pring lying undiscovered,” he said.  “Although, as was acknowledged in court, his body was actively concealed by the tenant.   “What I think is most important now is that we demonstrate that we have long since learned from this experience.

“New protocols have been put in place to support vulnerable people, and large numbers of our staff have been trained accordingly.  “Although we’ll continue to respect people’s right to the quiet enjoyment of their home, where they are vulnerable and cannot cope (and in some cases cause a nuisance or health hazard to their neighbours), we will intervene as necessary to stop things spiralling out of control.”