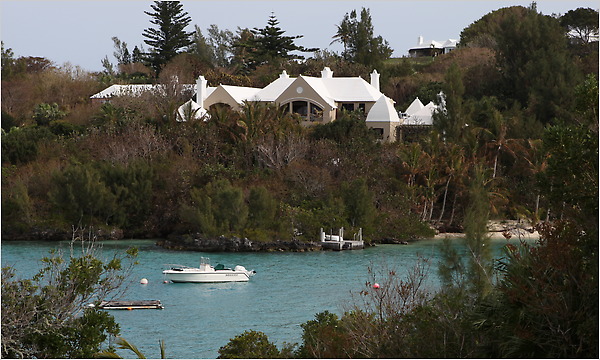 HAMILTON, Bermuda — At Greg’s Steakhouse, the power lunch spot on this sun-soaked island, Mayor Michael R. Bloomberg is such a regular that he has his own booth, with a view of the Parliament building. The waiters have memorized his order: coffee-rubbed New York strip steak.

The cabdrivers in Bermuda know Mr. Bloomberg by sight and jockey for a chance to drive him around town. (The billionaire mayor, they say, tips well.)

Members of the Mid Ocean golf club, where he plays up to two rounds a day, can rattle off the strengths and weaknesses of his game.

“He’s a bit slow, to be honest,” said one of them, who found himself stuck behind the mayor’s foursome recently.

Mr. Bloomberg, who owns a waterfront estate here, has walled off his life in Bermuda from voters in New York, arguing it is none of their business. He steadfastly refuses to say when he is on the island, and to blindfold prying eyes, he has blocked aviation Web sites from making public the movements of his private planes.

Yet residents here view him as one of their own — as much a Bermudan as a New Yorker. They follow his battles against term limits and New York City crime, and argue that their island plays a key role in restoring his energy and helping him succeed in office.

“We provide him with a place to unwind for a day or two, and then go back to a very important job, not just to New York, but to the world,” said John Swan, Bermuda’s former premier and a frequent Bloomberg lunch guest.

In dozens of interviews, residents described Mr. Bloomberg, 68, as a fixture on the island, dining out with lawmakers, cruising its streets in his golf cart and hosting small parties at his house.

It is difficult to say exactly how often he stays on the island; neighbors and friends say he is here about twice a month, depending on the weather in Bermuda (no sun, no Bloomberg) and the political climate in New York.

Prolonged absences arouse worry. After Mr. Bloomberg did not show up at a restaurant called Rustico for an unusually long stretch last summer, the manager asked the mayor’s Bermudan housekeeper if everything was all right.

She explained that the mayor was busy campaigning for a third term, making travel to Bermuda next to impossible (and undoubtedly impolitic). “She said he would be back,” said the manager, Antonino Amato.

The Bermudan jaunts do pose political risks. New York City mayors have historically prided themselves on working seven days a week and racing to the scene of an emergency even on the weekends.

Mr. Bloomberg does not. His aides know better than to schedule public events after Friday mornings, allowing the mayor to make his getaways to Bermuda on Friday afternoon and be back in New York by Sunday evening. (Of the 17 Fridays since Dec. 31, the mayor had no public events scheduled after 10 a.m. on 13 of them.)

The mayor’s aides say he can get back quickly if needed — the flight between New York and Bermuda takes about two hours — but there have been some notable absences.

In February, a City Hall aide was struck by a car early one Sunday morning and fell into a coma, ordinarily an emergency that would prompt a mayoral visit. The mayor spoke to the aide’s grieving family by telephone while aides rushed to the hospital. Mr. Bloomberg eventually met with the family late Sunday afternoon, after returning to New York.

Two weekends ago, Mr. Bloomberg skipped the annual Greek Independence Day Parade on Fifth Avenue, leaving some spectators miffed. He has attended the parade for the past two years, and was grand marshal in 2006. During the mayoral campaign last fall, he often boasted of his connections to Greek New Yorkers, even printing up thousands of signs that declared, “Greeks for Mike Bloomberg.”

Bermudans say he was on the island both weekends. Asked if that were the case, Stu Loeser, a spokesman for Mr. Bloomberg, would say only: “The mayor, like everyone else, is entitled to some privacy, which is why we generally don’t discuss how he spends his personal time.”

The mayor also takes along a police detail when he travels, flying two officers on his private plane and paying as much as $400 a night to put them up at a hotel near his house; the city pays their wages while they are there, as it does whether Mr. Bloomberg is New York or not. Guns are largely forbidden in Bermuda — even most police officers do not use them — but the mayor’s guards have special permission to carry weapons. A spokesman for the Police Department declined to comment.

Mr. Swan, the former premier, dismissed questions about the mayor’s ability to run New York City when he is, say, on the 14th hole at Mid Ocean in Bermuda. “He is never out of reach here,” he said. “People think he is going off to some isolated place where he can’t be found, but he can return with very short notice.”

He smiled broadly, and added, “We are much closer to New York than Florida is.”

As she waited for a bus in Hamilton, Barbara Frith, an administrative worker, rattled off her knowledge of the mayor, from his résumé as a businessman to his $1-a-year salary. She said she liked his controversial rewriting of the city’s term-limits law last year, which allowed him to run for a third term. She was on his side. “If it ain’t broke, don’t fix it,” she said

Mr. Bloomberg bought an estate in Bermuda, called Stokes Bay, by 1998. He demolished the 2,620-square-foot house and commissioned a local architect to replace it with a $10 million home nearly three times its size in Tucker’s Town.

Even by Bermudan standards, it was flashy: five balconies, four bedrooms, seven bathrooms, an in-ground pool and space for four cars, all hidden by a gated driveway, according to documents on file with the Bermuda Department of Planning.

The plans showed a sprawling property dotted by “imported” palm trees, long pergolas and a ridged roof that collects rainwater for drinking.

Mr. Bloomberg’s new neighbors did not approve. In a tart letter, the planning committee at the Mid Ocean club, which acts as a zoning board for nearby land, complained that the proposed house was “too large” for the site and would result in the “obliteration” of views for nearby residents. It deemed the project “unacceptable.” The Bermudan government found its own problems with the plans. Its marine experts objected to the mayor’s proposal to build a large dock in front of the house, arguing it would disrupt the sea grass beds in the area, records show.

Mr. Bloomberg’s architect agreed to shave three feet off the height of the house and abandon plans for the dock.

The estate contains a pristine private beach, facing Tucker’s Town Cove, but neighbors said Mr. Bloomberg was not much for sunbathing.

When he is on the island, they said, he plays golf — obsessively. He is a member of the island’s two best courses, Tucker’s Point and Mid Ocean (initiation fee: $50,000), which are, not by accident, within walking distance of his home.

The mayor knows the employees of Mid Ocean by name, and in typical Bloomberg fashion, he recently ordered a giant bouquet of flowers for the club secretary.

Michael H. Dunkley, a member of the Bermudan Senate and the president of Mid Ocean, said Mr. Bloomberg routinely played 36 holes on Saturday and 18 on Sunday, squeezing about 15 hours of golf into a single weekend.

“We wish all of our overseas members played as much as he does,” Mr. Dunkley said.

The mayor brings his houseguests onto the course. Edward Skyler, the deputy mayor for operations at City Hall, Sheldon Silver, the speaker of the New York State Assembly, George E. Pataki, the former governor, and Joseph L. Bruno, the former majority leader of the State Senate, have all played with him here.

As he does in New York, the mayor dines out most evenings. He is fond of the sleek restaurant Port O Call, where the pan-seared lemon sole is $38, and the clubby Tom Moore’s Tavern, where the grilled quail wrapped in bacon is $35.

In January, Mr. Bloomberg and his companion, Diana L. Taylor, had dinner at the Point, the island’s most talked about new first-class restaurant, where the mayor left a $175 tip on top of the 17 percent gratuity automatically charged by the restaurant.

“I was very lucky that night,” said the waiter who served him. He did not want his name in the paper for fear of losing his job (and any future tips from the mayor).

Mr. Bloomberg often eats with members of his security detail. At Rustico, his favorite Italian restaurant in Bermuda, he stakes out an outdoor table for six and orders platters of herb-marinated chicken, tenderloin of beef and fresh orecchiette.

He is determined to blend in. For years his assistants made reservations at local restaurants using an alias, to avoid having the waiters fuss over him.

At times, though, his attempts at privacy border on the extreme. Shortly after Mr. Bloomberg was elected mayor, he requested that the Bermudan government seal all of his housing records, according to a letter from his architect. The government refused. Since then, the mayor’s gardeners have stopped trimming the vegetation around his house. It has grown several feet taller and now largely blocks the viewfrom the water. (The downside: it obstructs the mayor’s view.)

His celebrity status has made him a prize guest. He dines regularly with the current premier, Ewart F. Brown, whose wife has become friends with Ms. Taylor, and he has turned up at the Bermuda home of H. Ross Perot, who lives a few houses up the street.

Mr. Bloomberg, who relishes entertaining at his town house in New York, has fewer parties in Bermuda, friends said. Invitations to his house are rare, and coveted. Two of the mayor’s neighbors said they had been invited over for drinks, and found the mayor — who has a reputation for being chilly at times — amiable and relaxed after a day of golf.

“He is the perfect neighbor,” said David A. Brown, who lives next door to Mr. Bloomberg. Applying a yardstick familiar to every New Yorker, he added, “He is very respectful; he never makes noise.”