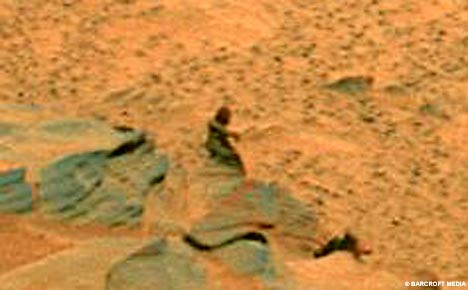 Call me rocky: The intriguing image captured by Nasa on Mars

A special mission to the Red Planet has revealed the likely presence of a form of pond scum – the building blocks of life as we know it.

NASA unveiled the results of the recent Opportunity and Spirit probes sent millions of miles through the solar system to discover signs of extraterrestrial life.

The results are so promising boffins have already planned a host of other missions to discover whether there is extraterrestrial life in the universe.

The recent missions have gathered evidence of sulphates on Mars, a strong indication there is water on the planet and therefore life.

Previous missions to Mars have concluded there is probably water on the planet.  But the NASA boffins said the recent missions have gone further than any others in proving there is life on Mars.  They were particularly excited about the discovery of a sulphate called gypsum which, it has emerged recently, is found in large quantities among fossils in the Mediterranean.

Jack Farmer, researcher at the Arizona State University, in Tempe, Arizona, said he was “optimistic” there was – or had been – life on Mars.  Another of the scientists Bill Schopf, researcher at the University of California in Los Angeles, added: “One, thanks to Opportunity and the rovers and orbital imaging it is clear that there are literally vast areas of Mars that are carpeted with various sorts of sulphates, including gypsum.

“Two, it turns out on earth there just hasn’t been hardly any work done at all to show whether gypsum ever includes within it preserved evidence of former life.  “The age doesn’t matter. We just didn’t know that fossils and organic matter and things like that were well preserved within gypsum.  “So, three, it turns out that now we have made that first step we are going to find out how widespread it is in other sulphate deposits on earth.

“And those lines of evidence will then give us a way to justify going to Mars and looking at gypsum because it looks as though based on these findings that is going to turn out to be a really excellent place to find evidence of ancient life, regardless of age, if in fact it is there.”  Five experts took part in last night’s press conference to celebrate 50 years of astrobiology research.

Dr Steve Squyres, of Cornell University, Ithaca, New York, said the only way of being sure there is life on Mars was to bring back a sample of Mars rock.  He also said that the detection of methane in the martian atmosphere – as revealed exclusively by The Sun – raised the possibility that there was still life on Mars today.  “Methane is a molecule that should go away very quickly. We need to send a mission to find out if the source is biological.

“We also need to send a mission to return samples from Mars. That would enable scientists to find out whether Mars might ever have harboured life.  “If we are ever going to show if there was ever life on Mars, I think we’re going to have to study samples back on Earth.”  Almost 30 other NASA missions to discover life in space – including one to bring back rocks from Mars – have already been planned.

There are also plans to visit Jupiter’s moon Europa to explore its deep underground ocean and a moon of Saturn, Enceladus, which spouted ice volcanoes.  Long-term missions will also return to Saturn’s biggest moon Titan, sending a balloon flying through its atmosphere and landing a probe in its surface lakes.

NASA scientists have been searching for extraterrestrial life on other planets for some time.  Last November the space organisation launched the Kepler space telescope to look for Earth-size planets in this galaxy.  The telescope is on a three-and-a-half-year mission to find planets.  NASA has so far been able to download data – but many believe there are aliens out there.

British physicist Stephen Hawking said this week aliens might be traveling through the cosmos right now – but he warned they might have evil intentions.