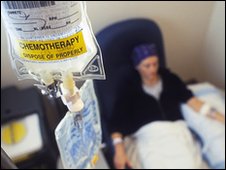 Scientists now hope to test their theory in clinical trials

Viruses can be modified to find and destroy cancer cells, according to scientists at the University of Leeds.

Their research found that proteins could be added to a virus to allow it to recognise unique markers which appear on the surface of cancer cells.The virus can then deliver gene therapy to the cells, scientists said.  So far the work, funded by Cancer Research UK, has taken place in the laboratory but now researchers hope to try the technique in clinical trials.

During tests it was found that once the virus had recognised and infiltrated cancer cells it could deliver genes to affect them.  The genes can make the cancer more sensitive to drugs, ‘suicide’ genes can be introduced, or missing or defective genes which cause the cancer to develop can be replaced.  The process of introducing genes, known as gene therapy, is not new.  Dr John Chester, who led the study, said: “Gene therapies have been out of fashion over the last couple of years.

“This isn’t an indication that they don’t work; just that we haven’t found the best way to use them yet.”  The team worked on bladder cancer cells in the lab but said it could potentially apply to any kind of cancer.  Dr Chester added: “Our research points to a new method to optimise viruses for gene therapy and has so far been promising in the lab.

“We now need to test these gene therapies in patients to see if they are as effective treating cancer as our research suggests.”   The findings of the research has been published in the scientific journal, Gene Therapy.