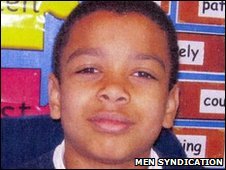 Louis Austin [right]  had a rare form of diabetes

An eight-year-old boy died from diabetes after being misdiagnosed with swine flu by an out-of-hours doctor service, an inquest has been told.

Louis Austin, from Old Trafford, Greater Manchester, died from undiagnosed diabetes last July.  His family had called for an ambulance but it was thought he was a low priority and one was never dispatched.  When they called an out-of-hours GP Louis was diagnosed with swine flu and prescribed Tamiflu. He died days later.

Coroner Joanne Kearseley recorded a verdict of death by natural causes contributed to by neglect, and condemned the North West Ambulance Service (NWAS) which took the first call.  During the inquest at Stockport Coroner’s Court, an expert said if Louis had received the correct treatment he would have had a 95% chance of surviving.

The inquest was told how Louis, who also suffered from asthma, fell ill in July 2009.  He had been suffering headaches and chronic fatigue and on 11 July his condition worsened.  His mother, Melanie Austin, 44, called 999 and told the operator her son was so sick he could not stand or speak.  But the operator did not class the call as urgent and referred Louis to the NWAS urgent care desk.

The call, which came in the middle of the swine flu pandemic, was passed to the out-of-hours medical service Mastercall because it was a Saturday, and was answered by Dr Tracey Leigh.  The GP followed a flow chart to diagnose the youngster with swine flu. The following day, Louis’s mother found him cold and not breathing in bed.  He was taken to Royal Manchester Children’s Hospital where he was pronounced dead.

A post-mortem examination revealed that Louis had diabetic ketoacidosis, which is caused by a shortage of insulin.  It can strike in 24 hours and has symptoms including rapid weight loss, vomiting, dehydration, rasping breathing and coma.  The coroner said: “This call should never have been sent to the out-of-hours service.  “It is abundantly clear they failed to ascertain answers to crucial questions.  “The call should have led to urgent medical intervention.”

Coroner Kearsley singled out the ambulance service for criticism.  She said Dr Leigh’s diagnosis did not amount to neglect, but the NWAS’s role in the little boy’s death did.  She said she was writing a letter to the Trafford Primary Care Trust, Mastercall, the NWAS and the Department of Health.  A spokesperson from the NWAS said procedures had been put in place and under-16s no longer go through to the urgent care desk.