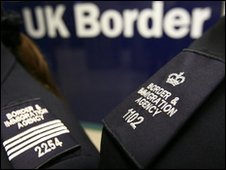 All the main parties have said they will address border controls.

A survey commissioned by the BBC has revealed that 61 % of Londoners feel not enough is being done to address the issue of immigration.

And 44% believed the public were suffering because of the number of immigrants in the capital.

Many parts of London are defined by their immigrant populations – one of these areas is Lewisham in south-east London.  The constituency of Lewisham Deptford also has severe housing problems and widespread poverty.   Conservative candidate Gemma Townsend said areas like Lewisham could not sustain high rises of immigration because standards in services like schools, housing and hospital had fallen “well below par”.

She added: “In the past 13 years, Labour has operated an open door policy on immigration, with the UK seeing the largest sustained rise in our history.   “I’m still surprised every time I knock on someone’s door and find that despite living here most of their life, they can hardly speak English.”

Ms Townsend said she believed the current government was not doing enough to integrate immigrant communities and teach them about British culture – an idea that the Conservatives are keen to promote.

Joan Roddock, Labour candidate for Lewisham Deptford, said she had brought people together by actively connecting with new and old immigrant communities.

She said: “As soon as a critical mass of immigrants from a particular country builds up locally, they tend to form a community group and contact me about their concerns.

“As a consequence, I have had long term contact with the local Chinese and Vietnamese communities, helping them to access grants and establish self help groups including supplementary schools.

“The same has been true of those more recently arrived from Somalia, Somaliland and Afghanistan. Other groups have organisations not based in Lewisham Deptford but which do contact me from other parts of Lewisham.”

Liberal Democrat candidate Tamora Langley said immigration was a top priority for one in 30 people in Deptford.

She said: “People are frustrated by seeing immigrants placed in council housing when they, or their children, have been on the waiting list for years.

“Particularly in Lewisham Deptford, where the Labour-run council has lost money that should have been ours to spend on upgrading social housing, people feel let down, and some wonder if immigrants are getting a better deal.

“We will build the first new social housing in a generation and review housing allocation policies to make it fairer for those people who have been on the list a long time”.

But not everyone thinks tighter restrictions on immigration are a good thing.

Across the river, in two of London’s famous food districts, the topic of immigration is being monitored closely – their industries depend on it for their survival.

Restaurants in Chinatown, central London, and Brick Lane in east London said the trade was suffering because of a crackdown on workers.

Leslie Ng, from London Chinatown Chinese Association, said: “At the moment, it is very difficult to find good skilled workers to carry on the trade, and the quality as a whole now is on a downward trend.”

A number of restaurants in the Brick Lane area are closing because of a shortage of skilled staff.

Yawar Khan from the Federation of Bangladeshi Caterers said businesses needed help from the government to stay afloat.

He said: “A lot of businesses are suffering at the moment due to a shortage of skilled staff and a lot of restaurants are closing and we want the government to help us.”