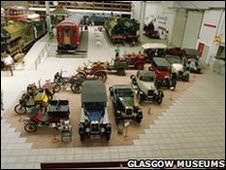 The closure of Glasgow’s Museum of Transport has been marked by the launch of a public appeal to raise £1.8m towards its new home.

The exhibition space at Kelvin Hall closes on Sunday prior to the museum’s move to the new £74m site on the banks of the Clyde next year.

The Riverside Museum Appeal has already raised £3.2m towards the total cost of the building.

It is now asking people to support its final push to reach its £5m target.

Donors will be offered the chance to have a name, either their own or as a tribute to someone else, added to a “virtual donor wall” in the museum.

Most of the money for the new museum has been provided by Glasgow City Council and the Heritage Lottery Fund.

There will be more than twice as many objects on display in the museum’s new home, including a large South African train which has recently been on show in George Square.