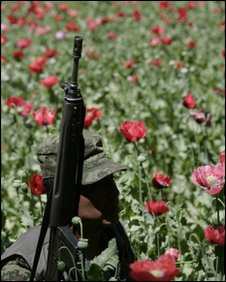 US Defence Secretary Robert Gates has expressed concern that drugs traffickers will begin using routes into the US through the Caribbean.

He told leaders in Barbados he wanted to work more closely with the region as pressure on Mexican routes was likely to make smugglers shift their efforts.

The United States says about three-quarters of South American cocaine comes through its border with Mexico.

It says the drugs enter the country after being smuggled along a land route through central America.

The Caribbean leaders believe the drug trade through the islands is already increasing as the US pours hundreds of millions of dollars into the fight in Mexico.

At a regional security conference in Barbados, Mr Gates emphasized the need to tighten coordination between anti-drug efforts in Latin America, the Caribbean and the US

Mr Gates added that US President Barack Obama was strengthening security aid to the Caribbean, which had dropped during the Bush administration.

He said: “After 9/11, the US began to draw down its presence and engagement in this region.”

Mr Gates said he hoped to show “the United States is re-engaging in this region and that we will work with these countries to address these problems”.

In 2007, the US started a $1.4bn strategy to help Mexico fight the drug cartels.

Prime Minister of Barbados, David Thompson, said: “Obviously, we consider [drug smuggling] to be a threat to our individual, national and regional well-being in every sense of the word… We believe the United States is aware of what these concerns are.”