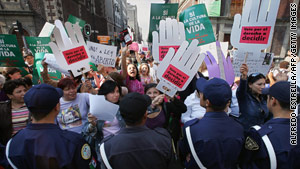 The girl’s stepfather has been arrested. But advocates on both sides of the issue say their battle is just beginning.

“This girl is much more than an isolated case,” said Adriana Ortiz-Ortega, a researcher at Mexico’s National Autonomous University who has written two books on abortion in Mexico, “and there is much more influence now from conservative groups that are trying to prevent the legalization of abortion.”

Abortion is legal in Mexico’s capital city, but prohibited or significantly restricted in most of the country’s states. The girl’s home state of Quintana Roo, on the Yucatan peninsula, allows abortion in cases of rape during the first 90 days of the pregnancy. But the 10-year-old girl is at 17½ weeks, nearly a month past that limit.

Advocacy groups are calling for federal officials and the United Nations to investigate Quintana Roo’s handling of the matter, claiming officials did not inform her of her abortion rights.

“We don’t know what is happening, and the institution that is supposed to provide support and care for these minors hasn’t been transparent. We’re really asking for accountability,” said Maria Luisa Sanchez Fuentes, director of the Information Group on Reproductive Choice.

State Attorney General Francisco Alor Quezada said he did not know whether officials had told the girl she had the option of pursuing an abortion, and he did not know how far the girl was into her pregnancy when her mother reported the assault to authorities last month.

He said the girl is in the custody of state protective services, and officials are closely monitoring her physical and psychological care.

“I do not think there is another instance in which the girl could be in better hands,” he said Monday.

Child protective services officials in Quintana Roo said in a statement last week that the girl and the fetus were in good health.

But Quintana Roo state legislator Maria Hadad said the girl’s doctors aren’t telling the whole story. She said continuing the pregnancy could cause severe mental and physical health problems for the girl.

“It’s not just a high-risk pregnancy. It’s a pregnancy that puts the girl at risk,” Hadad told Mexican broadcaster Channel 10 in Chetumal, Mexico.

The Roman Catholic Church vocally opposes abortion in Mexico, and the topic has long been controversial there. The debate has been particularly heated since 2007, when the nation’s more liberal capital city approved a law legalizing abortion during the first three months of pregnancy with no restrictions. That decision was challenged and ultimately upheld by the country’s Supreme Court in 2008.

Since 2007, 17 states have passed laws “protecting life beginning at conception,” according to the Information Group on Reproductive Choice. Legislators in Quintana Roo, which is also is home to the popular resort city of Cancun, approved such changes to its constitution last year