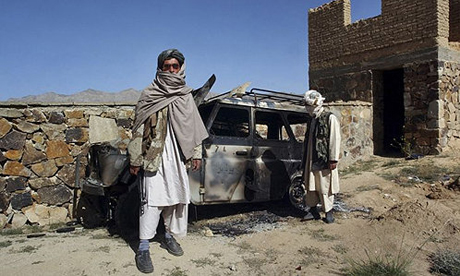 Taliban insurgents with hidden faces pose for the camera in Afghanistan. British forces have been accused of being aware of torture risks when handing over suspects to the Afghan secret service.

British forces handed over suspected insurgents to the Afghan secret service with a clear risk they would face “horrible abuse” and torture, the high court heard today.

The accusations were made by anti-war activist Maya Evans, from St Leonards, East Sussex, who is seeking judicial review of the government’s detainee transfer policy in Afghanistan.

So concerned is the Ministry of Defence about the challenge to the practice, that it is insisting that evidence it had passed to her lawyers must now be suppressed.

As a result, skeleton argument from her lawyers – a document consisting of an outline of the case – includes a number of passages blacked out at the insistence of the MoD.

Following one long excised passage, the document revealed in court today reads: “The lessons from these shocking events is … investigation by the NDS [Afghanistan’s National Directorate of Security] is obviously incapable of providing any satisfaction of the UK’s human rights obligations.”

Public Interest Lawyers, the solicitors’ firm representing Evans, say the “horrific brutality” of the NDS was well documented. They say they have gathered details of nine cases involving allegations of beatings, electrocution, sleep deprivation, individuals forced into stress positions and whipping with rubber cables. Michael Fordham QC, for Evans, told the court: “The issue in this anxious case is whether the practice of handing over of suspect insurgents to the NDS is compatible with Article 3.”

He told Lord Justice Richards and Mr Justice Cranston: “We will submit emphatically that it is not. It never was.” Article 3 of the European Humans Rights Convention prohibits torture, and inhuman and or degrading treatment.  The MoD initially described Evans’ legal challenge to the British practice of handing over detainees to the NDS as “totally misconceived”, the high court was told.  However, after allegations came to light about ill-treatment at NDS facilities in Kandahar, Kabul, and Sangin, in Helmand province, there was a “change of direction”.

The ministry “finally acknowledged that there were serious issues” involved and agreed to a judicial review, a court challenge to the practice, Fordham said. He referred to “reputable reports which record that the use of torture and other serious ill-treatment is endemic and indeed routinely resorted to by NDS officials, even at a very high level”.  The British government’s denials of such abuse were the result of a “head in the sand” attitude, he said. Fordham continued: “The factual and evidential picture which has emerged is a deeply troubling one.”  The judges were told that part of the case will be heard in secret without lawyers representing Evans from hearing the evidence.

Other parts will be heard in what was described as “semi-secret”, with all the lawyers present but the media and members of the public excluded.  Britain agreed to a Memorandum of Understanding (MoU) in 2006 with the Afghan government upholding the “basic principles of international human rights law such as … the prohibition on torture and cruel, inhumane and degrading treatment”.   However, the court was told that British officials had admitted that the “whole legal basis” of the MoU was based on trust. One unidentified official was described as admitting that when the undertakings were broken it put the UK government “in a very difficult position”.

Evans said before the hearing: “The government is deeply mired in allegations of torture in Afghanistan. I’m pleased that, at last, a British court is to scrutinise this. Human rights should be at the centre of our government’s policy, not an inconvenient afterthought.”