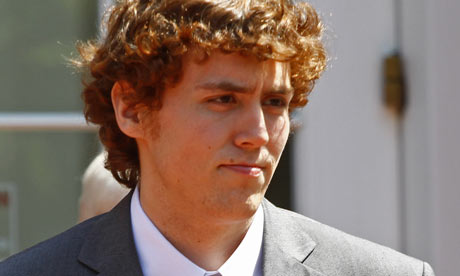 Sarah Palin today addressed the jury at the criminal trial of the man accused of hacking into her email account during the 2008 presidential election campaign.

Palin spent 45 minutes in the witness box in a federal court in Knoxville, Tennessee where David Kernell, 22, faces up to 50 years in prison if found guilty of four charges.

Palin told the court that the “disturbance” to her email had disrupted her personal and political life. “If the intent was to disrupt it, it was successful. It caused a huge disruption in the campaign,” she said.

The prosecution alleges that Kernell, then an economics student at the University of Tennessee-Knoxville, broke into Palin’s Yahoo! email account gov.palin in September 2008 by answering simple security questions. He gained the information from Google, including her date of birth, the postcode of her home, and where she had met her husband, Todd. He is accused of changing her password to “popcorn” and posting some of her email contents on the internet under the pseudonym “rubico”.

The 2008 Republican vice-presidential candidate told the court she first learned she was the victim of hacking on TV when she was on the campaign trail in Michigan. “I saw a picture of my kids on the television screen,” she said.  Kernell is charged with identity theft, wire fraud, entering Palin’s email without permission, and interfering with the FBI’s investigation into the hacking.

The prosecution alleges that Kernell, whose father is a Democratic politician, was motivated by a political desire to harm the Republicans’ presidential hopes. The prosecution lawyer, Thomas Van Flein, told the jury the hacking was “disruptive to [Palin’s] ability to communicate with her staff”. The defence counters that it was merely a “silly prank”.

Her daughter Bristol testified that she had received harassing phone calls and texts after her mobile phone number was revealed in one of the hacked emails posted online.