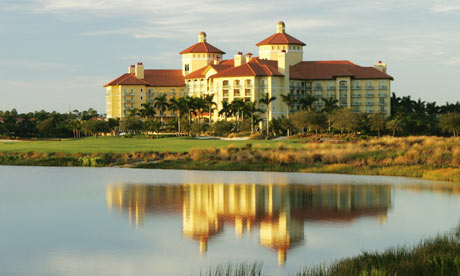 A British family has been banned from staying at a chain of luxury hotels after allegedly requesting not to be served by “people of colour” at a Florida resort.

The demand, allegedly lodged by the family on arrival, has emerged in a claim by a Haitian-born waiter against the Ritz-Carlton hotel in Naples, Florida. The family, named by the hotel as the Morgans, are said to have checked in on 29 February.

According to the writ, the hotel – at the direction of its managing director, Edward Staros – recorded on its computers the “preference” that the family not be served by “people of colour” or staff with “foreign accents”. The note reportedly added: “This couple is very very prejudice”.

The claimant, Wadner Tranchant, 40, a naturalised US citizen who has worked at the Ritz-Carlton for 15 years, said that on 12 March the hotel “instructed the serving staff regarding the stated prejudice of the Morgan family” when they reserved a table in the restaurant. Tranchant’s attorney, Michael McDonnell, told the Guardian: “As a lawyer you are required to conduct an investigation before taking a case, and we have done that. There are a number of witnesses to support his story.”

Tranchant is still employed at the Ritz-Carlton despite his lawsuit against the hotel chain, McDonnell said.

The lawsuit seeks more than $75,000 (£49,000) in compensation for Tranchant, who was “humiliated, embarrassed, frightened, intimidated, subject to undeserved shame and suffered severe emotional distress”. No date has been set for a hearing. The hotel has 20 days from when the lawsuit was filed on Tuesday to submit a formal response.

The Ritz-Carlton’s website promises “world class restaurants and impeccable service” at its Naples property, a 450-room waterfront hotel with panoramic views of the Gulf of Mexico, two heated swimming pools and two golf courses designed by the former world No 1 Greg Norman where rates start at $439.

Tranchant’s claim states that staff in the restaurant were advised “through its computer notification system and word of mouth” of the family’s “stated prejudice”, and that as Tranchant began to serve them “he was prevented by his supervisors from doing so because they did not want to be waited on by a black person”.

The lawsuit adds: “Other employees also encountered similar treatment on multiple occasions”, with “such conduct so severe or pervasive that a reasonable person in [Tranchant’s] position would find the work environment to be hostile or abusive”.

The Ritz-Carlton group declined to say whether any staff had been disciplined, but confirmed the family had been contacted and “banned from staying at any Ritz-Carlton hotel”. Vivian Deuschl, a company spokeswoman in Washington, said the hotel “does not tolerate or condone discrimination of any kind by its employees or visiting guests.”

Bruce Seigel, the hotel’s director of marketing, added: “The hotel has very strict policies in place to prohibit discrimination and harassment and we take very seriously any allegation of discrimination or harassment.”

The case provoked a flurry of comments on US websites. “The hotel should be fined heavily … and the money given to a charity that helps fight racism,” was one view. “Those beastly boors from Britain should have been given the boot the moment they made their bigoted request,” noted another blogger.

One New Yorker posted: “I know this may sound wrong, but I have to side with the hotel on this one. They’re simply doing what they’re supposed to and honor the old adage about the customer always being right.”