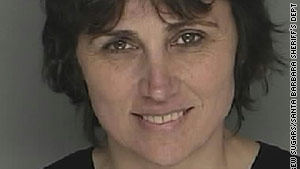 Los Angeles, California (CNN) — Actor Randy Quaid and his wife, Evi, spent several hours in the Santa Barbara County, California, jail Monday after they showed up for a hearing on accusations that they defrauded an innkeeper and failed to pay a hotel bill.

A judge set bail at $100,000 each for the actor and his wife, who missed several previous hearing dates, Santa Barbara District Attorney Arnie Tolks said.

The Quaids were handcuffed, taken from court Monday morning and escorted by sheriff’s deputies for booking, Tolks said.

The judge did give them each $20,000 credit for a previous bond. After about four hours in jail, they posted the remaining $80,000 each and were freed from jail until another hearing Wednesday, according to the sheriff.

The couple were originally arrested in Presidio County, Texas, last September, accused of skipping out on a $10,000 hotel bill in Santa Barbara. Each faces felony charges of burglary, defrauding an innkeeper and conspiracy.

Quaid, 56, is known for his roles in several films, including the “National Lampoon’s Vacation” movies, “Kingpin” and “Brokeback Mountain.”