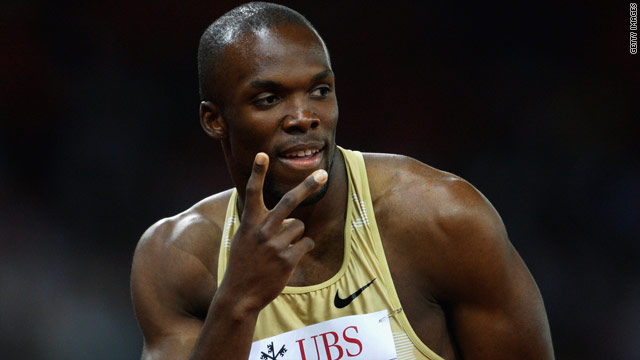 U.S. Olympic gold medallist LaShawn Merritt faces a suspension of up to two years after testing positive for banned steroids, which he said was the inadvertent result of taking an over-the-counter “male enhancement” pill.

In a statement issued through his attorney, Merritt said he has accepted a provisional suspension after drug tests found the steroids DHEA and pregnenolone in his system.

“To know that I’ve tested positive as a result of product that I used for personal reasons is extremely difficult to wrap my hands around,” he said. “I hope my sponsors, family, friends and the sport itself will forgive me for making such a foolish, immature and egotistical mistake.”

Merritt, 23, won gold medals in the men’s 400 meters and 400-meter relay at the 2008 Beijing games. The statement said the use of the substance “was completely unrelated to athletics, and occurred at a time that he was neither seriously training nor competing.”

His lawyer, Howard Jacobs, said Merritt could be suspended for up to two years once the U.S. Anti-Doping Agency completes its probe. Merritt was notified of the positive result in March after tests in October, December and January, and the runner was “shocked and saddened” by the news, Jacobs’ office said in a statement issued Thursday afternoon.

The USADA confirmed the test results but did not indicate what action it might pursue.

“USADA’s investigation regarding Mr. Merritt’s positive drug tests is continuing. USADA will make a further announcement concerning this matter following a full investigation and completion of the legal process,” the agency said in a statement.

USA Track and Field, the sport’s national governing body, said it was waiting for a formal decision from the USADA. But it said Merritt’s case “brings shame to himself and his teammates.”

Doug Logan, the organization’s CEO, said: “Any professional athlete in this sport knows that they are solely responsible for anything that goes into their bodies.”

“He has now put his entire career under a cloud and in the process made himself the object of jokes,” Logan, said in a written statement. “In this day and age, a professional athlete should know better. Personally, I am disgusted by this entire episode.”