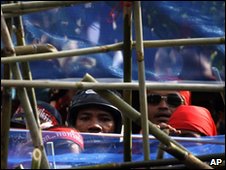 Hundreds of riot police have moved up to confront red-shirt anti-government protesters in Bangkok’s city centre.

But the police stepped back from immediate confrontation after a night in which five explosions killed at least one person and wounded 75.

Britain, the US and Australia have issued new warnings against travelling to Thailand in the aftermath of the attacks.

Six weeks of protests are severely challenging the Thai government.

Pressure is rising on the government to find a way out of the conflict but room for negotiation appears to be slim, the BBC’s Vaudine England in Bangkok says.  United Nations Secretary General Ban Ki-moon said through a spokesman that it was “a moment requiring restraint on all sides”.

The police moved right across the main Rama IV road to face up to the red-shirt barricades for about two hours early on Friday, only to pull back again. Protesters were hurling abuse and waving sharpened bamboo spikes – to impassive stares from the security forces across the road.  At least 75 people, many of them commuters on Bangkok’s elevated train system, the Skytrain, are being treated in hospitals around the focus of Thursday night’s tension in the Silom area of Bangkok.

Earlier reports had said that three people were killed, but the government later said that one person died. Deputy Prime Minister Suthep Thaugsuban said the explosions were M79 grenades.  He said they had originated from a southern corner of Bangkok’s Lumpini Park, which is behind the red-shirts’ barricade.  But red-shirt leaders denied all responsibility for the explosions, saying they were not in the business of hurting innocent people.

“This is the work of the terrorists that the government has always been wanting to get rid off,” government spokesman Panitan Wattanayagorn said.  Bangkok has been on edge for days as the armed forces and senior government figures have repeatedly issued warnings to the red-shirt protesters to leave the centre of the city.  Army spokesman Col Sansern Kaewkamnerd said on Thursday that “time was running out” and that many people would be hurt if a new crackdown was ordered.

“The government will be very decisive but in the beginning of the operation there may be chaos.”  Some of the “anti-red” protesters – who have gathered alongside the troops – and have called on the government to be more firm against the reds, our correspondent says.   However, the armed forces Commander-in-Chief, Gen Anupong Paojinda, insists he is seeking a peaceful way out of the political conflict.   Britain is advising against all but essential travel to Bangkok, while US and Australian government warnings advised against travel to Thailand.