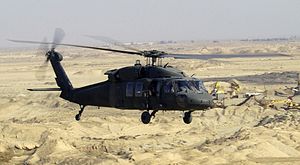 BAGHDAD — An American soldier has been killed and three injured in a helicopter crash in northern Iraq, the U.S. military said Sunday. The UH-60 Black Hawk went down late Saturday evening, the military said. The cause is under investigation, but it is not believed to be enemy fire, the military said in a short statement.

They both spoke on condition of anonymity because they were not officially authorized to discuss the case.
The Black Hawk is the military’s mainstay transport helicopter in Iraq. It is designed to carry up to four crew members and a fully equipped infantry squad of 11, but it was not clear how many people were aboard the aircraft that crashed.  The military also did not immediately say what mission the helicopter was on when it crashed.   It follows the February crash of a helicopter on a base in northern Iraq that killed two Army pilots.

With Saturday’s death, at least 4,391 members of the U.S. military have died in the Iraq war since it began in March 2003, according to an Associated Press count.