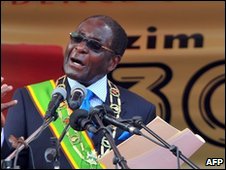 Zimbabwean President Robert Mugabe has called for an end to political and racial violence as the country celebrates 30 years since independence.

Speaking at a ceremony marking the anniversary, he urged Zimbabweans to “foster an environment of tolerance”. He also said he would press ahead with a controversial plan to hand over foreign-owned firms to black people. The policy is opposed by Mr Mugabe’s partner in the unity government, the Movement for Democratic Change.

Addressing supporters at Harare stadium, Mr Mugabe said: “The leadership of the inclusive government urges you to desist from any acts of violence.”  He added: “As Zimbabweans, we need to foster an environment of tolerance and treating each other with dignity and respect irrespective of age, gender, race, ethnicity, tribe, political or religious affiliation.”

Mr Mugabe also promised to press on with the planned transfer of 51% of shareholdings in foreign companies to black Zimbabweans, completing a process that began with the seizure of white-owned farms a decade ago.  MDC leader Morgan Tsvangirai, who attended the ceremony as prime minister, has opposed the plan, saying it will discourage foreign investment.   Mr Mugabe, a former guerrilla leader, was elected president following independence from Britain in 1980.

The country experienced growth in its first decade but the economy began to decline in the 1990s. In 2000 Mr Mugabe launched his controversial land reform programme.  In the following years, farm production and the currency went into free fall. Meanwhile Mr Mugabe suppressed the opposition, saying it was in league with former colonial power Britain.

In 2008, the MDC won a parliamentary majority. But Mr Tsvangirai withdrew from the presidential run-off, citing violence against supporters. However the two sides reached a power-sharing deal later in the year. On the eve of the anniversary, a civil rights group said four of its members had been denied bail after they were accused of staging an illegal protest.  The group, Women of Zimbabwe Arise (Woza) deny wrongdoing. The four were part of a group of women demonstrating against regular power cuts and high electricity tariffs in Zimbabwe. 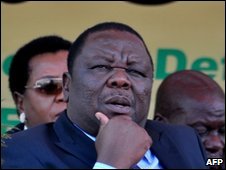