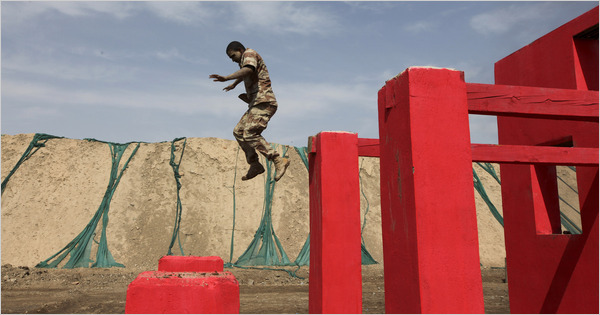 Iraqi soldiers took part in a training demonstration in Habbaniya. The ranks of the police are often still the first place

CAMP HABBANIYA, Iraq — Iraq’s security forces, once mocked for deserting firefights and feared as a sanctuary for rogue death squads, crossed a crucial line of competence during the recent parliamentary elections: With little American help, they kept the nation overwhelmingly safe for voting.

But as recruits return after the election to this dusty training outpost, the army and the police face new questions, not only about remaining gaps in ability, but also about loyalty in an uncertain period. More than a month after the election, there is still no new government, no certain leader that the security forces can look to — and few precedents for a peaceful transfer of power.

“The problem is going to be in the struggle for a new government,” said Anthony H. Cordesman, who holds the Arleigh A. Burke chair in strategy at the Center for Strategic and International Studies, which in 2007 prepared a report for an independent commission appointed by Congress to study Iraq’s security forces. “Who are the armed forces loyal to? Are they going to be loyal to the prime minister, or the Constitution, or what?”

These questions have taken on new urgency after a spate of violence — roadside bombs, car bombs, the slaughter of entire families — that is reminiscent of the worst days of Iraq’s sectarian and insurgent warfare.

Nerves were set on edge here right after the March 7 elections when Prime Minister Nuri Kamal al-Maliki raised the specter of violence and invoked his role as commander in chief in calling for a manual recount. Many opponents were already worried that he would use the security forces for his own ends, something he has denied doing.  But Ayad Allawi, the former interim prime minister, whose Iraqiya coalition won the most seats, said that if he led the next government, he would overhaul the army and the police, contending they were still “riddled” with terrorists, despite continuing efforts to rid them of sectarianism.

“After eight years since the downfall of Saddam Hussein, the people say, ‘We want to be safe,’ ” Mr. Allawi said in an interview. “The law enforcement agencies are not available to make them safe.” At least two winning candidates from Mr. Allawi’s coalition have gone into hiding after learning they were targets for arrest, including one who has had a long relationship with the Iraqi government and the United States military in trying to reconcile divisions between Shiites and Sunnis. Inside the increasingly professional ranks, the same questions are being asked about how the security forces will weather the transition. Some argue that they are still not ready to face it alone.

“We need the coalition forces and the U.S. Army to work with us, especially in the coming days, because we are afraid that we will face inner loyalty problems among the armed forces,” said Lt. Ahmed Abood, 36, an Iraqi Army officer in Baghdad. Although the Interior Ministry has purged the police force of more than 60,000 officers in recent years in its efforts to build a force loyal to Iraq and not to sectarian identity, the ranks of the police are often still the first place investigators turn after attacks. After pre-election bombings in Baquba, a restive city north of Baghdad, killed more than 30 people, a police officer was among those arrested.

Col. Darrell F. Halse of the Marine Corps, who is advising the Interior Ministry’s head of internal affairs, said the ministry opened more than 125,000 cases over the last four years involving its officers. Most are for minor offenses, like being drunk on duty, but others are for terrorist activities. If electoral success is considered a verdict on job performance, the defense minister, Abdul-Kader Jassem al-Obeidi, who runs the army, and the interior minister, Jawad al-Bolani, who oversees the police force, have fared poorly. With United States combat troops scheduled to withdraw by the end of August, leaving 50,000 service members in Iraq in an advisory capacity until the end of 2011, much of the historical legacy of America’s war here will depend on whether Iraq’s police and army can safeguard their country in the years to come.

While the security forces have made steady progress since they were rebuilt, after the still contentious decision at the outset of the war to disband the existing Iraqi Army, they are far from ready to do the job alone. On a recent morning, Col. Dhurgam al-Khafaji, in charge of Iraqi Army training here, was candid with a visiting American general about the conditions of the facility. “This center lacks the right equipment and the right resources, in terms of housing the soldiers, bedding and so forth,” he said, over coffee and cookies. “The barracks are not fit to live in.” Iraq’s Defense Ministry is so laden with bureaucracy, he said, that he often does not bother to ask for what he needs because “it complicates things.”

Lt. Gen. Michael D. Barbero, the deputy commanding general for advising and training for United States forces in Iraq, confirmed what the Iraqi security services already knew too well. “The days of us providing everything is coming to an end,” he told the Iraqi colonel. “There is a need to work on your system.” Brig. Gen. Abdul Jilebawi, who oversees the police training center here, mostly empty on the day of General Barbero’s visit because officers had not yet returned from election duty, spoke about recruitment problems. “I don’t want to hide this,” he said in an interview. “The Anbar police still has A.Q.I. elements in it.” (He was referring to Al Qaeda in Iraq, also known as Al Qaeda in Mesopotamia, a largely homegrown insurgency group that the Iraqi government has blamed for the recent attacks.)

American military officers praise the progress rank-and-file Iraqi soldiers have made in becoming a fighting force, but they say the upper echelons need to improve in areas like administration, logistics and the development of a noncommissioned officer corps. They are generally confident that Iraq’s forces can respond to internal upheaval but say they are not ready to deal with a potential foreign threat, particularly from Iran in the east and Syria in the northwest.

Nowadays, the American military relies on the Iraqis for information about the levels of violence in the country. But Iraqi commanders’ professional advancement is based partly on the number of violent episodes in their areas of operation, so there is an incentive to underreport those events, said Lt. Col. Jim Maxwell, of the First Brigade, Third Infantry Division. Mr. Maliki’s much-parsed statement did not go unnoticed within the Iraqi Army. “The guys here are cautious,” said Colonel Maxwell, speaking about his Iraqi counterparts. “This is going to be the first successful change in power. They’ve never seen it. “There is a tendency to believe the guys who are saying, ‘He’s not going to give it up.’