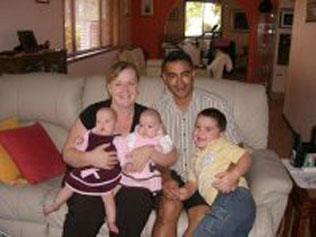 David and Nicole Epapara with their children. Source: The Sunday Mail (Qld)

A FAMILY is in mourning after their toddler unexpectedly died less than 12 hours after receiving a seasonal flu vaccination.

National health authorities have ordered doctors to stop giving seasonal influenza vaccinations to children under five after dozens of serious reactions, including convulsions.  Ashley’s death is being investigated by police and the office of the coroner. A spokesman for Brisbane coroner John Lock confirmed yesterday that a report was being prepared.

Mrs Epapara told The Sunday Mail that “tests are being carried out” on her little girl.But the young mother didn’t want to comment further as she began shaking and her eyes welled with tears.  Ashley’s twin sister, Jaime, also received the flu jab at the same time and is believed to have been vomiting the night before her sister died.  Asked whether he or his wife thought the influenza vaccine had anything to do with their child’s death, Mr Epapara said: “It’s very coincidental.”

More than 45 children experienced convulsions and fever, with some having to be taken to hospital in intensive care after receiving the vaccine in Western Australia.  Australia’s chief medical officer Professor Jim Bishop said in a statement that the West Australian events were being “urgently investigated by health experts and the Therapeutic Goods Administration”.  The World Health Organisation last year said a “small number of deaths” had occurred in people vaccinated for influenza, with 65 million people vaccinated globally.

“Our deepest sympathies go out to this family at this time.
“Queensland Health is working closely with the Coroner on this matter.”