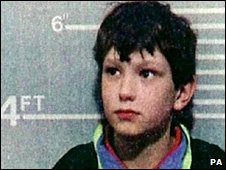 Jon Venables,[right] was detained for eight years for the murder of James Bulger

A police file containing the allegations against toddler James Bulger’s killer Jon Venables has been handed to the prosecution. The decision whether to charge Venables, 27, who breached the terms of his licence, now lies in the hands of the Crown Prosecution Service (CPS). If the case goes to trial, it will be held in public, Justice Secretary Jack Straw has said. Venables and Robert Thompson murdered two-year-old James in 1993. They were given new identities on their release in 2001.

The authorities will not divulge what Venables is alleged to have done to break his licence terms, despite pressure from the public and James Bulger’s mother, Denise Fergus. Mr Straw said he would not reveal more details other than they were “serious allegations” because of concerns from police and prosecutors that it would hamper the investigation. A CPS spokeswoman said: “A file in relation to the suspect known as Jon Venables has today been passed to the Special Crime Division of the Crown Prosecution Service.

“A decision as to whether or not charges will follow will be taken as soon as practicable.”

Jon Venables and Robert Thompson were just 10 years of age when they took their victim from a shopping centre in Bootle and killed him on a nearby disused railway line.