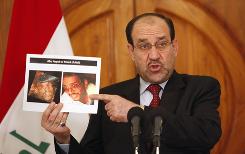 Iraqi Prime Minister Nouri al-Maliki said Abu Omar al-Baghdadi and Abu Ayyub al-Masri were killed Sunday when U.S. and Iraqi forces rocketed a home where they were hiding out. The U.S. military confirmed the two top leaders were killed in the attack, just a few miles outside of the northern city of Tikrit, the hometown of former Iraqi dictator Saddam Hussein.

“The death of these terrorists is potentially the most significant blow to al-Qaeda in Iraq since the beginning of the insurgency,” Gen. Ray Odierno, the top U.S. commander in Iraq, said in a statement. “The Government of Iraq intelligence services and security forces supported by U.S. intelligence and special operations forces have over the last several months continued to degrade AQI.

“There is still work to do but this is a significant step forward in ridding Iraq of terrorists. ”

Al-Masri, also known as Abu Hamzah al-Muhajir, was the military leader of AQI, which has run a well-organized and lethal insurgency aimed at ousting the U.S. military and toppling the Iraqi government. AQI is responsible for killing thousands of civilians as well as U.S. and Iraqi troops.

Al-Masri replaced Abu Musab al-Zarqawi after the former AQI leader was killed in June 2006 in a U.S. led raid on his hiding place near the north-central city of Baqouba.

AQI has been greatly diminished since the worst days of the insurgency of the 2006-07, but the militant group still has proven the ability to make their mark with spectacular attacks.

In recent months, the terrorist organization has claimed responsibility for a series of suicide bombings on government buildings and hotels popular with westerners that have left hundreds dead.

Al-Baghdadi, also known as Hamid Dawud Muhammad Khalil al Zawi, was also killed in the attack. He served AQI as the leader of the proclaimed Islamic State of Iraq and held the title “Prince of the Faithful.”

Maliki announced the killings at a news conference in Baghdad and showed reporters photographs of their bloody corpses.

The Iraqi army arrested 16 additional suspects who were wanted on criminal warrants, according to a U.S. military statement.

One U.S. soldier was killed in the operation, when the helicopter the soldier was flying in crashed, the U.S. military said.