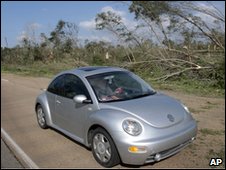 YAZOO CITY, Miss. — Tornadoes ripped through the Southeast on Saturday, killing 10 people in Mississippi and injuring more than a dozen others. Roofs were torn off businesses, homes were splintered, vehicles were overturned and roads were blocked by toppled trees.

Barbour told The Associated Press there was “utter obliteration” in parts of Yazoo County, an area known for cotton, catfish, blues music and picturesque hills rising abruptly from the flat Mississippi Delta, and declared a state of emergency for 17 storm damaged counties.

Mississippi Emergency Management Agency spokesman Greg Flynn said five people were killed in Choctaw County, including two children. Four victims were in Yazoo County and one was in Holmes County.

Three of the dead, including two children, were in Choctaw County, another three were in Yazoo County, and the final death occured in Holmes County, Flynn said.  Some of the injured are being taken to the University of Mississippi Medical Center in Jackson.  At least some of the patients at UMC are from the Yazoo City and Lexington areas, said Tena McKenzie, spokeswoman for the hospital.  “We are anticipating more patients being admitted,” she said.  Four adult patients were in critical condition and one was in stable condition. Two children were in stable condition, McKenzie said.

The swath of debris forced rescuers to pick up some of the injured on all-terrain vehicles the west-central part of the state.  In Warren County, at least 30 homes were rendered uninhabitable by the storms, MEMA spokesman Jeff Rent said. Damage reports are still coming from there and other areas, he said.  County and city fire departments are continuing search and rescue throughout the northern and eastern parts of the county for the missing.

“We still have people trapped in houses and cars,” said Barbour during an impromptu press conference in front of Ribeye Steakhouse off U.S. 49. The governor became teary describing the damage done to Yazoo City, his hometown.  “It reminds me of (Hurricane) Katrina,” he said.  The tornado’s path of destruction appears to be several miles wide and stretches from the Eagle Lake community north of Vicksburg to Yazoo City and into Holmes County.

Two were airlifted to the University of Mississippi Medical Center in Jackson. State health officials as well as nurses from King’s Daughter Medical Center have set up a medical triage center in a strip mall off U.S. 49 near Mississippi 16.

“This sucker is leaving a path of destruction,” Flynn said.  In Yazoo City, churches, businesses and homes have been reduced to splinters. There is no official estimate on the scope of the damage.  There are still parts of Yazoo City and County that are inaccessible because of downed power lines and debris. State troopers are denying access to non-residents.  The Mississippi National Guard had been deployed to help protect people and property.  The Salvation Army had dispatched units to Yazoo and Warren counties. “We are serving hot meals, coffee, cold drinks and spiritual counseling,” Capt. Ken Chapman said. “We are equipped to serve thousands. We will be here until they tell us to leave.”

Though aid agencies are present, much of the early response was coordinated by residents who rode out the storm.   Ashley Saxton and her husband Rob were in their car at a stop light on U.S. 49 when the tornado blew the windows out, picked them up off the road and spun them around. Despite scratches from broken glass, they spent the afternoon passing out cups of ice water to homeless families and relief provid AMR says its ambulance transport numbers are now at 20.

“Most of those we are seeing are the walking wounded,” Clay said. “The critical ones have been people with lacerations. We had someone with an open chest wound who was transported. We have an OB patient now (pregnant woman).”  Flynn said the tornado jumped the Mississippi River into Mississippi around 11:30 a.m. central time.  “It caused a bunch of damage in Louisiana,” he said. “Then it strengthened when it got into Issaquena.”

A band of heavy weather that passed through east central Mississippi earlier in the day caused damage in that part of the state. Flynn said there are reports of trees and power lines down in Lauderdale County.

That band of heavy storms passed through between 8-9 a.m. followed two hours later by a second, more damaging round.  Tornadoes were also reported in Louisiana, Arkansas and Alabama, and the severe weather continued to track eastward.