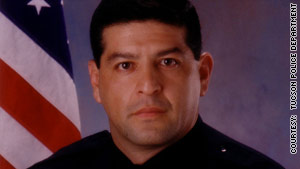 Officer Martin H. Escobar has filed a lawsuit over the state of Arizona’s new immigration law.

A police officer in Tucson, Arizona, asks that local law enforcement be exempt from enforcing the state’s new immigration law in a lawsuit filed in federal court on Thursday.

Officer Martin H. Escobar claims in the suit that the law will “seriously impede law enforcement investigations and facilitate the successful commission of crimes.”

He also says there are no “race-neutral criteria or basis to suspect or identify who is lawfully in the United States,” including a person’s proximity to the Mexican border, linguistic characteristics and capabilities, skin color, clothing worn or the type of vehicle driven.

The law, signed by Arizona Gov. Jan Brewer on April 23, allows police to ask anyone for proof of legal U.S. residency. Brewer and others who support the law have said it does not involve racial profiling or any other illegal acts.

“Racial profiling is illegal,” Brewer said after signing the bill. “It is illegal in America, and it’s certainly illegal in Arizona.”

But Escobar’s suit says the law “is the product of racial bias aimed specifically at Hispanics” and places every Hispanic within the state at risk of losing his or her constitutional rights.

Escobar asks that local law enforcement be exempt “from engaging any immigration stops, questioning, detention, citing or any law enforcement activity reserved to the federal government.”

Escobar, 45, is a naturalized U.S. citizen who was born in Mexico and immigrated with his parents when he was 5 years old, attorney Richard M. Martinez said.

Tucson Police Department spokesman Sgt. Fabian Pacheco declined to comment on the case because city policies prevent employees from discussing pending litigation. But he said Escobar has worked for the department since 1995 and patrols Tucson’s south side.

Martinez said his client has spent years working to break down barriers between the Police Department and the predominantly Hispanic community.

“All this law does is put the barrier back up. … It takes away trust and the rapport and relationships,” he said Thursday.

Spokespeople for Brewer and Goddard did not return requests for comment.