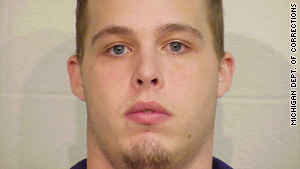 This photo of Brandon Joshua-Frederick Hayes, 24, is from a previous arrest.

A Michigan man could face life in prison after he allegedly tortured and ultimately killed his girlfriend’s 4-year-old son last week for wetting his pants, prosecutors say.

Hayes also apparently burned the boy in the course of the torture. “The knuckles across one hand were charred,” Argentine Township police chief Dan Allen said.  “I’ve been doing this a long time, and this is the worst case of child abuse I’ve ever seen,” the police chief said. “In all respects, he was tortured.”

CNN was unable to reach someone who could speak on Hayes’ behalf. Hayes’ motivation for his savage multiday attack on the boy was that the child “had wet his pants,” Leyton said. “It had happened before.” Hayes also resented the child because his “biological father wouldn’t pay child support,” Leyton said.  Dominick’s mother, Corrine Baker, was present for at least some of the beating and tried to shield the boy from Hayes’ aggression, authorities said. “She tried to lay on top of the child to guard the child against being beat any further, but she was beat in the process,” according to the police chief.

The sequence of events that led to the discovery of the abuse began when Baker’s sister and several acquaintances came to the apartment to buy drugs from Hayes, according to Allen. After seeing Dominick’s condition, the sister alerted the boy’s paternal grandfather, who in turn contacted authorities. When emergency responders entered the apartment on the afternoon of April 11, Dominick was “barely alive.” EMS transferred him to Hurley Hospital in Flint, where he was pronounced brain dead. The boy was taken off life support the following morning.

Dominick’s mother’s whereabouts and actions through all portions of the torture session remain somewhat hazy. The county prosecutor said his office is “still investigating her involvement in all this.” “She’s also culpable for putting him in the dangerous position in the first place,” he added. Baker was taken into custody on Sunday but released later. Attempts to reach her at her home Thursday evening were unsuccessful.

The town police chief said Baker and her son had been brought to the attention of Genesee County Department of Child Services on several occasions. The agency did not respond to CNN’s requests for comment Thursday. It was not immediately clear whether Baker’s involvement with the child services agency predated her relationship with Hayes. The police chief said he believed Baker and Hayes had been together for about six months.