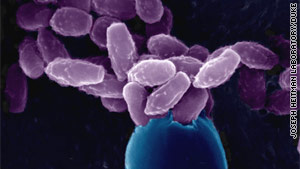 A rare but life-threatening tropical fungus that causes lung infections in both people and animals has been seen in the Pacific Northwest and could spread, researchers are reporting.

The fungus, known as Cryptococcus gattii (or C. gattii), has infected dozens of humans and animals–including cats, dogs, and dolphins–in Washington and Oregon in the past five years. While rare, the fungus has been lethal in about 25 percent of the people in the U.S. who have developed infections, according to Edmond Byrnes III, a doctoral student in molecular genetics and microbiology at Duke University and one of the lead authors of a new study about the fungus.

In the study, Byrnes and his colleagues analyzed 18 cases in people and 21 in animals that occurred in the U.S. between 2005 and 2009.

The symptoms of infection include chest pain, a persistent cough, shortness of breath, fever, and weight loss. The fungus can also cause meningitis, or inflammation of the membranes lining the brain, but can be treated with antifungal drugs. C. gattii is found in soil and trees, but experts haven’t yet determined how humans breathe it in.

Byrnes and colleagues have discovered a new, especially dangerous strain of the fungus. This strain–which is confined to Oregon, for now–is “highly virulent,” says Byrnes. “Overall it’s a pretty low threat, and it’s still uncommon in the area, but as the range of the organism expands and the number of cases increases accordingly, it’s becoming more of a concern,” he says.

The new strain is likely to move into Northern California and other neighboring regions, the researchers say. Other strains of the fungus have been found in people in San Francisco and Los Angeles, and in a bottlenose dolphin as far south as San Diego.

The fungus hails from the tropics and may have been carried to North America on imported plants or trees, experts say. It first emerged on this continent in 1999, on Vancouver Island off the coast of British Columbia, where it ultimately infected more than 200 people, killing nearly 9 percent of them.

From there, the fungus is believed to have crossed the border into the U.S. on logging trucks or car tires sometime before 2005, when the first infections were reported in Washington and Oregon. The cases in California “indicate that C. gattii can survive in that habitat,” says Yonathan Lewit, a research technician at Duke and a co-author of the new study, which appears in the journal PLoS Pathogens.

The new strain described by Byrnes and his colleagues seems to have mutated relatively recently, and has appeared in humans as well as in cats, dogs, and other animals. (In animals, symptoms include a runny nose and breathing problems, and other strains have been seen in ferrets and llamas too.)

The mutation “is causing major illness in the region, and it’s different from what’s causing disease on Vancouver Island,” says Christina Hull, PhD, an assistant professor of medical microbiology and immunology at the University of Wisconsin School of Medicine and Public Health, in Madison.

“It supports the idea that this is a recent change in the organism,” she adds. “That’s a little more unnerving than what people had thought before.”

In the past, C. gattii has tended to cause disease in people with weakened immune systems, such as those with HIV/AIDS. (The fungus was found in AIDS patients in Los Angeles, for instance.) But the new strain is causing respiratory symptoms and meningitis in otherwise healthy people.

Experts aren’t sure what makes some individuals more vulnerable to infection and illness. “We’ve not been able to distinguish these people from the population at large,” says Hull. “Are they more likely to be smokers? No. And it’s happened across a range of ages and different backgrounds.”

Nor is it clear how people are contracting the infections. Although the fungus is found in trees and soil, Hull explains, it’s unclear if breathing near a tree carrying the fungus is enough to infect a person. And because the incubation period is unknown, tracing the illness back to the point of infection is nearly impossible.

“Our best guess is that it’s mostly associated with trees and soil, so certain disturbances might allow the organism to become airborne and more or less float in the area,” says Byrnes.

Although C. gattii has been found in a North Carolina man who had traveled to San Francisco several months earlier, experts say that the fungus is not readily passed between people (or people and animals), and it’s therefore unlikely that it will spread across the continent via plane or other travel.

Experts stress that even people near the epicenter of the outbreak should not be unduly concerned.  Philip Alcabes, Ph.D., an infectious diseases epidemiologist at Hunter College, in New York City, says that genetic changes such as those described by Byrnes are “a pretty normal, expectable evolutionary event in nature that has a slight amount of human fallout.”

In fact, he says, if this fungus follows previous patterns, it’s very possible that the virulence will decline with time.   And besides, there’s not much you can do to protect yourself from it in the meantime.

“There are no real precautions you can take, because it’s hard to tell which areas would be more infected or where levels of C. gattii could be higher,” Byrnes says.