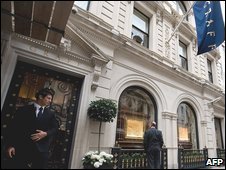 The New Bond Street jewellers were targeted on 6 August

Robbers used professional make-up artists to disguise their appearance during a £40m gems heist in which people were shot at, a court heard.

Woolwich Crown Court heard the men threatened to kill one worker in Graff Jewellers, central London, and the manager had a gun pointed at his head.

The prosecution said terrified employees handed over the jewellery, which has not been recovered.

Prosecutor Philip Bennetts said a young woman was taken hostage at gunpoint to enable the robbers to make their way to the getaway car following the raid in Mayfair.

“The terrified employees handed over the jewels, people who attempted to impede the escape were shot at, and the bag containing the jewels was handed to the waiting motorcyclist who made his escape,” Mr Bennetts said.

He said the victims were “the real centre of this case, not the value of jewels that were taken”.

Manager Martin Leggatt was spread-eagled on the floor with a gun pointed at his head and shop assistant Petra Ehnar was told she would be killed if she did not carry out the robbers’ demands, he said.

“It is obvious to state that a robbery in that environment is one where the stakes are high and which requires meticulous planning,” Mr Bennetts added.

The jury of eight women and four men was shown footage of the moment a shot was fired in the street outside the store as passers-by began to realise what was happening.

The mobile phone footage caught raised voices and shouting outside the jewellers before a loud shot sent people running for cover.

Mr Kassaye fired shots when they were approached outside the store and their actions were caught on CCTV, he said.

Seven others deny conspiracy to rob

The nine defendants are:

• Craig Calderwood, 27, of no fixed address

Mr Kassaye also denies kidnap and possession of a handgun and sawn-off shotgun.