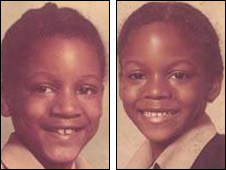 Police have charged a man with murdering a woman and her two children almost 30 years ago.

Norma Richards, 27, and her daughter Samantha, nine, were stabbed to death at their Hackney home in 1982. A second daughter, Syretta, seven, was drowned.

Wilbert Dyce, known as Tony, was charged with murder after police reopened the case.  Mr Dyce, of Forest Gate, is due before Westminster Magistrates’ Court tomorrow charged with three counts of murder.  The dead bodies were found at the home on the Kingsgate Estate, Dalston, in July 1982.  There were no charges at the time, but last year the case was re-examined.  Detectives have asked anyone with information about the deaths to come forward.