Ralph Paige, [right] director of a Southern family farmer nonprofit, says the settlement is about much more than money. 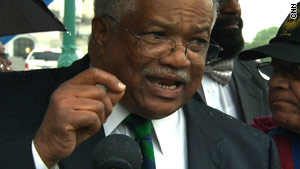 African-American farmers hoping for government settlement money in a racial bias case met with lawmakers Wednesday and called on Congress to come up with a way to fund the $1 billion deal.

Litigation known as the Pigford Case established a longstanding pattern of discrimination at the U.S. Agriculture Department against African-American farmers who had applied for farm loans and support from federal programs.

Under the terms of an involved process overseen by a federal judge and dating to 1999, qualified farmers could receive $50,000 each to settle claims of racial bias. In addition, U.S. Agriculture Secretary Tom Vilsack has said those farmers may pursue a claim for actual damages from the bias and potentially receive up to $250,000.

Ralph Paige, executive director of the Federation of Southern Cooperatives/Land Assistance Fund, said Wednesday that he believed that Congress was “very close” to coming up with a way to pay the settlement, which covers as many as 80,000 African-American farmers.  “These farmers have suffered much, much too long, and it’s time that this thing get behind us. We can settle Pigford once and for all and send a clear message to the country that we are on the right track as a nation,” Paige said at news conference.

“We’re talking about much more than the money. We are talking about remedying past discrimination,” Paige said.   A March 31 deadline to appropriate the funds has passed, and farmers now may withdraw from the settlement and pursue independent litigation against the government. Congress now has a target date of the end of May to come up with a plan.

“We spend a billion dollars on a jet to go bomb somebody. We’re talking about a billion dollars to help feed our country, and I just don’t see why Congress and the president can’t go ahead and find [the funds]. It is an emergency,” said Gary Grant, with the Black Farmers and Agriculturalists Association.   Rep. G.K. Butterfield, D-North Carolina, said there is a “total commitment” from President Obama and the majority party in the House and Senate to make sure the settlement is taken care of. Butterfield represents his state’s First Congressional District, which is home to Timothy Pigford, who filed the class-action lawsuit more than a decade ago.

Butterfield said lawmakers need to work out how to pay for the settlement under the PAYGO rule, meaning Congress must balance any increased spending with equal savings elsewhere. The other option would be to designate the settlement as an emergency, which would be exempt from PAYGO.  Lawmakers are looking for an appropriate piece of legislation in which to include the settlement to avoid adding to the deficit, Butterfield said.   “If we cannot find the appropriate vehicle, then I would certainly support declaring this settlement as a national emergency and adding it to the next supplemental that may be on the House floor,” he said.

Farmers have until May 31 to withdraw from the pending class-action settlement and pursue an independent claim against the government if they feel their chances would be better for a payout. If they choose to stay in the class, they will wait as a group to apply for the promised monetary damages.

Vilsack has said there’s no question the damages are due for African-American farmers. In a statement last week, he said, “I have met with and talked to key stakeholders and members of Congress reiterating the administration’s ongoing efforts to close this chapter in the history of the department.”