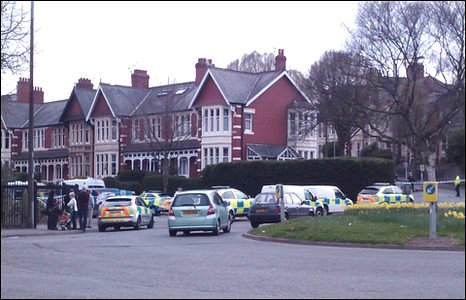 Police were called to the Roath Park area on Sunday (Pic: Rachel Guber)

A teenage boy has been stabbed to death and two family members injured in an attack in Cardiff, police say.

The 17-year-old was killed at a property in Ninian Road about 1340 BST on Sunday, South Wales Police said. Police were seeking two men, both of Asian appearance, seen leaving the area at the time, heading to Shirley Road. One was aged late 20s, of average height and stocky build, with dark hair and wearing dark clothing. The other was aged early 20s and of slim build. He was described as being 5ft 11in, and was wearing a white jacket with a grey stripe down the sleeves. Police sealed off two streets in the Roath suburb of Cardiff after being called to the scene, and Ninian Road remained closed in both directions on Monday morning. The road is not expected to reopen until lunchtime, and diversions are in place. Ninian Road borders the city’s Roath Park, which was full of families enjoying the sunshine on Sunday afternoon. Around 30 police officers and three ambulances attended the incident. An eyewitness said: “There were police everywhere. It was obvious something serious had happened.”  Chief Superintendent Bob Tooby, divisional commander of Cardiff Police, said: “This is a very serious incident and I wish to reassure the local community that a full investigation is under way in order to trace and arrest those responsible.”

Anyone with information has been asked to contact the incident room at Cardiff Central Police Station on 02920 571530 or Crimestoppers anonymously on 0800 555 111.