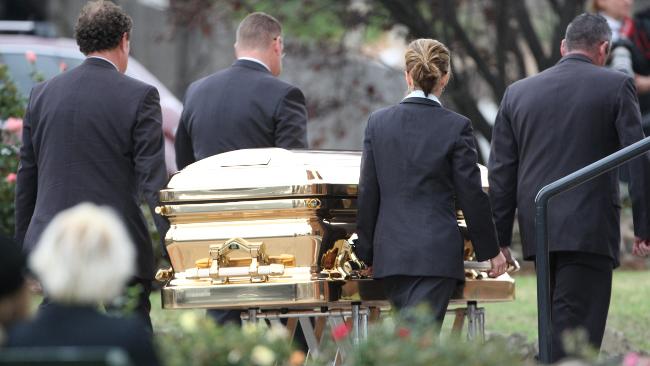 CARL Williams slayed his rivals “out of love” for his family, ex-wife Roberta told mourners at the gangland kingpin’s funeral in Melbourne today.

Tina Tuner’s anthem Simply The Best belted out through the high-vaulted church as about 150 mourners took their seats.

At the front of St Therese’s catholic church in Essendon, a large white and red floral display reading ‘I love you daddy’ rested against the alter.

Next to it was Williams’s gold-plated solid bronze coffin adorned with white roses.

The $30,000 casket was the same model as the one pop superstar Michael Jackson was buried in.

Ms Williams spoke about the special bond that she and Williams shared and how he had lifted her confidence when she needed it most. She told the congregation how Williams’ would often tell her to ‘lift your head ‘Bert’. “You gave me self-belief and confidence when it had been ripped away years before,” Ms Williams told mourners at St Therese’s Church in Essendon. “You didn’t love Dhakota (Roberta and Carl’s daughter) any more or less than my other three children.”

Dhakota also spoke and said she loved her daddy. “He was the best Daddy,” she said.  The eight-year-old spoke of her love for her father and told how he used to change lyrics to songs to annoy her mother. “Your favourite was Hot and Cold, but you sang for mum I’m hot and you’re not,” Dhakota said. “You thought you were really funny, but you weren’t.”

Williams’ father George sat in the front pew but had his eulogy read to the church by one of Williams’ step daughters.  In his last word’s to his son, Williams’ snr said, “you were my best friend.”  The service was dominated by stories of Carl showering his daughter and stepchildren with gifts, giving them everything they wanted, and teasing Roberta and making her angry.

“You gave me $500 after my teeth fell out, because you were drunk,” said his stepdaughter Bree.  “You were my best friend.  “I’m sorry I didn’t write to you and visit you as much as I should have, you were always there for me and stuck up for me, I have no excuse.”  Mourners were presented with a card bearing a portrait of Williams, his name Carl Anthony Williams and a night-time picture of Melbourne’s cityscape and the Yarra River.

The card read: “A loving dad, husband, son, brother and friend whose smile will never be replaced. 13.10.1970 to 19.4.2010. A special smile, a special face, a special man we can’t replace. Just think of Carl as resting from the sorrow and the tears in a place of warmth and comfort where there are no days and years.”  Father Bill Attard said it was appropriate to hold the funeral at St Therese’s because the church had adopted a prisoner and believed in the goodness of all people, including criminals.

There is a leper and a wolf in all of us, he said after recounting stories of St Francis of Assisi hugging a leper and taming a wolf.  “We are here to pray for Carl, he had the dignity of the human spirit in him,” he told mourners.  Father Attard spoke of the dignity of all human lives and told a Christian gospel story of a shepherd going to save the life of a sheep so it would not be left to the wolves.

Williams’ coffin is now on its way to Keilor Cemetery, where he will be buried not far from the graves of his mother and his former henchman, Andrew “Benji” Veniamin. The hearse is being followed by Ms Williams and her family in a black stretch Hummer. Williams, 39, was bashed to death with the stem of an exercise bike in the day room of his maximum-security unit at Barwon Prison, near Geelong, last week.