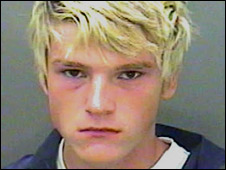 William Upton [right] claimed he punched the victim in self-defence

A teenager who boasted of punching a man in a fight who later died will receive a substantial custodial sentence, according to his trial judge.

His killer, William Upton, from Rishton in Lancashire, was convicted at Preston Crown Court of manslaughter after Mr Rogers hit his head on the floor.   Upton, 17, had boasted about the attack in an entry on the Facebook website.

Judge Stuart Baker had previously warned defence counsel that Upton faced a custodial term “which will extend considerably beyond his 18th birthday”.

Mr Rogers, a football coach from Dukes Brow, Blackburn, had tried to break up a row between his own friends and a group with Upton.   CCTV showed Mr Rogers trying to calm down the defendant who then punched him.  Upton claimed in court he struck the blow in self-defence.

The jury returned a verdict of guilty to manslaughter after deliberating for an hour.

Judge Baker had previously lifted an order banning identification of Upton because of his age, saying there was “a legitimate public interest in knowing who has committed grave crimes”.