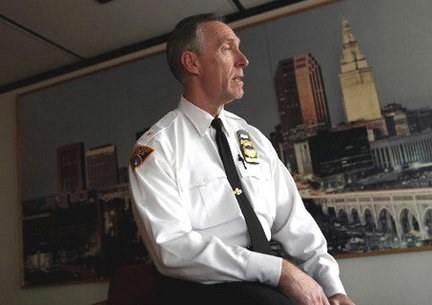 CLEVELAND, Ohio–Cleveland’s rank-and-file police officers have mixed reactions to the directive from the chief ordering cops to do their jobs or consider another profession.

The notice from Chief Michael McGrath has been the talk of the department this week, numerous officers said Friday. The sternly written order, issued April 9, is still being read at roll calls across the city.

The Plain Dealer polled 12 police officers Friday on the condition of anonymity to gauge how McGrath’s notice was taken.

The message should resonate with those who aren’t pulling their weight, several cops said. Others believe the directive was misguided and only serves to turn the public against the police.

One officer agreed with the chief but feared the notice could negatively impact how the public perceives all officers. He said police officials can only do so much to get their message through to the ranks.

“This gets us upset, especially the guys who work hard everyday,” he said. “But there are some officers who are just lazy.”

“The chief is blatantly wrong,” the officer said. “We go out of our way. We don’t have enough officers on the street.”

McGrath wrote the notice four days after two veteran officers mistook the body of a dead woman on Interstate 90 for a dead deer.

The letter came two weeks after a three-person commission studying police response to sexual-assault and missing-persons report recommended the department, among other things, train officers on empathy and sensitivity to victims.

Some officers have lost sight of the commitment they swore to uphold, McGrath wrote. He told officers that their mission is to improve life in Cleveland and do their job with professionalism and respect.

McGrath, who joined the department in 1981 and worked as a patrolman and SWAT boss for several years, was a commander in the 4th District before he became the chief. He was known for attending community meetings and urging residents to get involved in the community and cooperate with police.

He became chief in March 2005. His no-nonsense style has helped him serve under two mayors. Since 1968, only two out of 24 chiefs have served longer than four years.

The department and police unions have had less public battles under McGrath than compared to other chiefs.

But the agency has been under pressure due to the city’s budget problems, the case of accused serial killer Anthony Sowell – who critics say could have been taken off the streets much earlier if complaints against him had been prosecuted immediately – and criticism surrounding sexual-assault cases.

A few officers said morale is low in the department because the budget cuts forced layoffs of new officers and demoted police supervisors.

The majority have not forgotten their oath, a longtime cop said, adding: “Some people have become disenchanted at the patrol level. That is the backbone of the job.”

One officer said patrol ranks and detectives are overworked, but City Hall doesn’t want to hear that. He disagreed with McGrath’s notice.

“It seems unnecessary because we are doing more with less than we ever have here,” he added.

Several cops believe city leaders are making an example of the two officers involved in the dead body incident to appease the media and public.

Others said those officers are hardworking and didn’t need to be crucified by the chief or safety director.

“This is overblown and is all about politics,” one said.

One of his colleagues disagreed.

“The guys who screw up should pay the price,” he said.

The same officer said some morale issues are caused by decades-old seniority issues. The most veteran officers don’t work hard, and the shifts should include a mix of older and younger officers to get the most productivity, he said.

“A lot of officers have jobs that they don’t belong in,” the officer said. “It’s hard to change that.”

One officer praised McGrath and said very few are taking the notice personally. He said the rank-and-file realize the notice was directed at a small group of officers.

“It is a good thing,” he said. “This job isn’t hard. It gets stressful at time but we have been customer-service oriented since day one. We work for the citizens.”

The officer did have a request for McGrath. He suggested that the chief attend roll calls at stations throughout the city and address officers’ concerns.